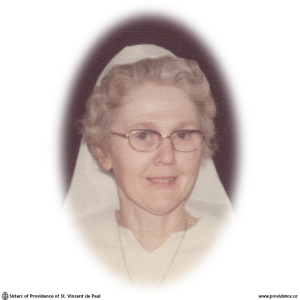 Hanorah (Norah) Margaret Forestell was the third of the six children born to Arnold Forestell and Clara McGillen. She came into this world on July 6, 1921, at Marmora, about twenty miles north of Trenton. Her family never moved far from that southern Ontario area where the parents themselves had been raised. Mr. Forestell was a farmer and possibly Norah developed her industriousness from doing her share of the steady round of chores that are part of farm living. Great sadness came upon the family when the oldest boy, Charles, died at the age of ten. He was but one year older than Norah, so that event may have planted in her the seeds of a devoted trust in God’s will that that was to last through to her own death.

Norah went to Minto Public School from Grade 1 to 8 and did not have a high school education. Her only opportunity for formal catechism lessons was likely in the summers when the Sisters of Providence came to teach in the area, or classes which the pastor might have given himself. Fr. Simon LeSage came as pastor to Stirling in 1938. His sister, Sr. Mary (Berna) LeSage, and Sr. M. Thrasilla (MacDonell) taught catechism classes in the Forestell home for a few summers during his pastorate.

About that time Norah began to earnestly pray about a call she heard in her heart to give herself to God as a religious Sister. Her prayer continued for two years while she tried to overcome somewhat her mother’s objections that she was too young and that religious life would mean long hours of hard manual work for an uneducated girl. Besides her grade school, Norah had only a three-month’s course in home economics.

In February, 1941, Norah wrote asking permission to enter and in August of that year she began her Postulancy. After first profession in 1943, Sr. M. Madeleine, as she was now called, remained at Heathfield for a year working in the altar bread department. On November 13, 1943, the Motherhouse Annalist records, “Sister M. Madeleine, recently professed, has received her license to (run) drive the car. The fact that one of our Sisters is able to run the car is going to be very convenient. She can drive to the schools while the roads are in fairly good condition. On other occasions, a taxi is always available to and from the city.” With this note the Annalist points out that Sr. M. Madeleine was the first Sister to get her driver’s license. Having driven on the farm before she entered, Sister already had the necessary sills and no doubt she was tickled to be able to use them for this service.

Following her time at Heathfield, Sister Norah had short assignments – a year or two each – at the House of providence, Kingston, St. Joseph’s Hospital, Edmonton and back to the House of Providence. During that time she gained a working knowledge of bedside nursing. Caring for the seriously ill, she often sat up nights with the dying and then worked again the following day.

Sister’s first lengthy posting was to Rosary Hall in Toronto for the nine years from 1950-1959. There she supervised the residents’ dining room. For the last three of those years she assumed the responsibility of Assistant to the Superior. To assist her in her work she took a short course in food supervision at Fontbonne College in St. Louis, Missouri.

Returning to the House of Providence in 1959, Sister Norah remained this time for eleven years. While she continued to do some nursing, her main duty was that of Sacristan at St. Mary’s Cathedral.

On November 1, 1963, according to the Annalist, a Legion of Mary was formed among the residents at the House of Providence. There were fifteen members. Miss Almon Doolan was president and Sr. Norah served as spiritual director. Several books of the Allocutions which Sr. Norah gave have been saved. In these it is evident that, despite the minimal formal training she had in her youth, she knew her faith very well and was a capable teacher. She fashioned her lessons to fit the abilities of the elderly membership, putting great stress on daily, ordinary practice of virtue.

“It is our task (like Mary) to be instruments of grace and blessing. You are that when you practice the simple, small, insignificant looking works of mercy such as showing consideration, doing kindnesses, rendering assistance, being obliging, giving pleasure and so on. These little works of charity are the best signs of a noble, kindly spirit.”

Another favorite theme in her talks was the redemptive value of suffering.

The straightforward style and unassuming language of her presentations would have greatly pleased St. Vincent who urged his priests not to resort to flowery oratory in their efforts to win souls.

In 1970 Sr. Norah was appointed to the Father Dowd Home in Montreal, where again she held the position of assistant to the Superior, evidence of the confidence the Sisters had in the goodness of this gentle and likeable woman. Some courses at Dawson College in art, dance, music and recreation gave fresh impetus to Sister’s work in the occupational therapy of the home, but actually she was a “natural”. Clever with her hands and able to obtain the cooperation and stir the enthusiasm of others, she was responsible for bringing in much needed funds through craft sales and bazaars.

By the time Sr. Norah returned to the House of Providence in 1977, it had been renamed Providence Manor. Placed in charge of the Occupational Therapy Department for what was to be her final tour of duty, she continued the good work she had done in Montreal. Miss Evelyn Storie, a resident who came to know Sister well, wrote of her as follows:

“Sister Norah had very clever, creative hands. She could follow directions from books or make up her own designs. Nothing ever was too much for her or too small a job to be important. She could take things people had discarded and made beautiful creations. She sold these things that she and the residents made to all who came along as well as holding at least four bazaars a year – one big one in the fall and three smaller ones – making well over $5,000 a year.

Sister was so kind and understanding with the older people and always had all the time in the world, it seemed, to listen to their troubles and give them the very best advice and assurance. She worked on the recreation committee and so went on different outings with the residents. She enjoyed her life to the fullest.”

In all Sister Norah gave twenty-three years service to the elderly of Kingston in our Foundation House.

Sister was a good “Community person” too, giving edification to all by her kindness, consideration and dedication. She never failed to arouse laughter by her pertinent wit and humorous stories and was quick to perceive and appreciate the least joke told by another.

But in the impenetrable wisdom of God, her active contribution was cut short. In January, 1985, cancer of the colon was discovered in surgery and the draining rounds of treatment were begun. The sisters living with her in the last six months of her life remarked on her patience, resignation, prayerfulness and spiritual strength. Although it cost her much, she continued faithful to daily Mass and was often present with the Community at other times, seeking thus to obtain the graces necessary to face the last days of her life.

It was while she was relaxing at Marillac Villa that those last days – or rather hours – suddenly came. On June 25, 1985 she had to be brought into Kingston to Hotel Dieu Hospital about 7:30 p.m. She had always kept up an affectionate contact with her immediate family and they came quickly from Belleville to be at her bedside. Sister remained conscious almost to the last. A half-hour before her death she talked with Monsignor J. G. Hanley who was making sick-call visits in the hospital. He inquired if she was satisfied should it be God’s will that she die. Sr. M. Annette (Kennedy), also present, remembers well her reply, “The will of God; that is all that matters.” She did not speak again before passing away at 3:30 p.m. on June 26. Her sister, Mrs. Mary Ward, Sr. M. Annette and the nursing staff were with her at the end.

A wake service for Sr. Norah was held at Providence Manor in the afternoon of June 27. The chaplain, Rev. M. McAuley, OFM Conv., led the prayer and the residents recited the Rosary. In the evening the remains were transferred to the Motherhouse. The funeral Mass on June 29 was concelebrated by Archbishop F.J. Spence, Monsignor J.G. Hanley, Rev. G. O’Hearn, Rev. T. Raby, Rev. J. Rozon, Rev. P. McAvoy and the homilist, Rev. M. McAuley.

Sr. Loretto Boland, who was guardian to Sr. Norah in her Novitiate days, recalls that she “seemed ready and open, able to adjust quickly” and was “possessed of a quiet and joyful confidence in God and in herself which gave her a peaceful and happy disposition.” She mentioned also her generosity. These traits, you have noticed, are common to the memories many people have of her. Sr. Norah has left behind an example of sweet virtue nourished by simple faith, which should be a source of joy and strength for all Sisters of Providence.