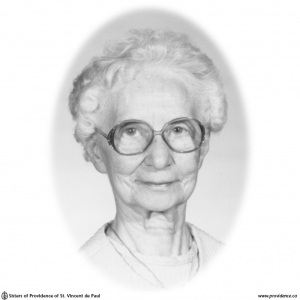 Although small in stature like Zaccheus of old, Sister Olive Gibbons, formerly Sister Mary Magdalene de Pazzi, was a great friend of Jesus and some would say a giant in the spiritual life.

In her 94th year, the last surviving member of her immediate family, Sister Olive died peacefully at Kingston General Hospital, on July 29, 1999.

Mary Olive Mildred Gibbons was born in Montreal on May 15, 1905. Taught by the Sisters of Notre Dame in both elementary and high school she was also acquainted with the work of the Sisters of Providence (Montreal) and knew that they were much loved by the people. After a short career in teaching Olive knew the classroom was not the ideal place for her.

Although Olive enjoyed having good time with friends, going to dances and entering into social events she felt an inner call to religious life which she resisted for a time. Her confessor believed Olive was being called by God and suggested she contact the Sisters of Providence in Kingston. She entered in August 1927 and remembered being very lonesome for her parents and her younger sister, Sally. Happily, as soon as she made her final vows in 1929, Sr. Mary Magdalene de Pazzi as she became known, began training to become a nurse. After graduation, she spent many years in St. Vincent de Paul Hospital, Brockville ministering to premature babies, many of whom would not have survived if it had not been for her loving care, over and beyond the call of duty. One couple, who credited Sister with the survival of their child, in gratitude, kept in touch with her to the end of her life. Sister Olive could entertain an audience for hours with her stories about her work as a maternity nurse. She delivered babies in cars, in the superior’s office and in elevators. Once she had to keep three illegitimate babies for eight months until she could find them a home. When at St. Mary’s of the Lake she let the soldiers who were billeted there help to care for some of the infants.

In 1989 Sister Olive had her knee operated on and nearly died of complications. Within the same stay in the hospital she had her gall bladder removed and her recovery was a very long and slow one. She had abdominal aneurism for several years. Nevertheless, she lived life to the full in every way possible. She called herself a ‘walking time bomb’ and knew that one day the aneurism would probably cause her sudden death and this is what happened shortly after she was admitted to Kingston General Hospital on July 29, 1999.

At her wake and vigil service the following evening many Sisters of Providence, whose lives she had touched, shared wonderful memories of the times they lived with Sister Olive. She was remembered for her joyful uncomplaining spirit and the way she took delight in life and an interest in everyone she met. She was full of love and wonderful to live with. She was also remembered as being a very prayerful person. Her grand-nephew, Jeffery Wale told how Sister Olive had taken care of his mother when she was ill. The whole family appreciated her generosity and her sense of humour. Sister was buried holding in her hands the seven dolor beads which her mother gave her before she entered and which she treasured for over seventy years. It was only after her entrance that she discovered the Sisters of Providence had a special devotion to the Seven Sorrows of the Blessed Virgin. She took this as a sign that she had come to the right place.

Sister’s Mass of Christian Burial was celebrated on Saturday, July 31, 1999 by Msgr. T.J. Raby, assisted by Rev. J.R. Rozon, Rev. Msgr. Don Clement, and Rev. C. Gazely. In his homily Monsignor Raby said that Sister’s niece, Charlene, other family members, Sisters and friends, were brought together by Sister Olive to celebrate her life. Her life was the means through which God expressed love to all to whom Sister ministered. She will be remembered as a faithful Sister of providence. May she rest in peace.