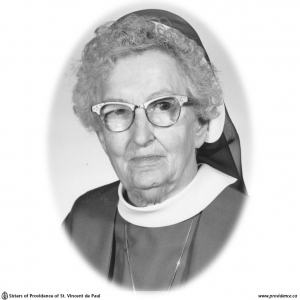 “Eternal Beginning, Creative Spirit,
Recreate me!
You Who have begun me,
Complete me.”

In the later years of her life, Sister Patricia Rashotte used this intense prayer to plead for God’s help in finishing the work of her sanctification. The invitation to full union with the Divine had been given her at baptism and she had done much through the ups and downs of childhood, adolescence and her active-adult years to respond to it. But now that prolonged poor health meant that her main occupation was to suffer, she felt more than ever that God must assist her if she was to bring her life to a holy end. She wrote as her beatitude: “How blest are those who know their need of God; the Kingdom of God is theirs.”

Patricia was one of four children born to Joseph Rashotte and Mary Brochu before Mary died in childbirth at age 38. For a year or two Grandmother Brochu helped to raise the two boys and two girls, then Joseph chose a second wife, Catherine Courneyea. “Kate”, as she was known, bore him an additional five boys and two girls. All of the children were raised in Tweed, Ontario, and took their education in St. Carthagh’s elementary school and the Tweed Public High School. The family was well-known in the area for Mr. Rashotte was a building contractor.

During her school years, Patricia, obtained excellent marks, urged on by her father’s desire that she excel. He was not likely too pleased with her the day she bent the radiator on his Star Six car by colliding with a truck while learning to drive; but such small things are quickly forgiven and, when she graduated from Ontario Business College, he took her into his employ as bookkeeper of the Rashotte Brothers Building Supplies. A friend of her youth remembers Patricia as a “grand person who never said an unkind word about another.” In many ways it appeared that she was prepared for a successful career in the business world.

Patricia, herself, however, had somewhat different ideas about her future. Since high school days she had felt remarkably certain that God was calling her to become a religious Sister. She admired the Sisters in Tweed and had heard about their life at the Sodality meetings which she faithfully attended. She much ‘admired the work of the Institute’ of the Sisters of Providence. Therefore, on December 18, 1931, she wrote to Kingston expressing her desire ‘to consecrate [her] life to the service of God’. Although she was prepared to enter elsewhere, if need be, for her conviction that God was calling her was very strong, she was permitted to enter Providence Novitiate on January 10, 1932. She was then 21 years of age, having been born on March 17, 1910.

Her capacity as a student was quickly spotted by the Community, and during her Postulancy she was allowed to add one more Grade XIII subject to those she already had. The subject was biology. Perhaps the Community was already laying plans for her to change from the field of business to that of nursing.

The years in Novitiate confirmed even more Patricia’s impression that she should become a Sister, so at First Profession she was able to say, “I shall esteem my Holy Vocation as the richest treasure which our Lord could bestow upon me.”

The first assignment given Sr. Mary Patrice, as she was called after profession, was to the office of St. Francis Hospital, Smiths Falls, Ontario; but before final vows she was moved on to St. Vincent de Paul Hospital, Brockville, and nurses’ training. Her excellent marks in the R.N. exams in 1940 led to her being sent next to the University of Toronto to qualify as a teacher and supervisor of nurses. Then she was assigned to the west in January, 1942, to be Superintendent of Nurses at Providence Hospital, Moose Jaw. After this series of rapid moves it seemed the stage was set for a full apostolate in nursing that is until a serious illness caused another turn in Sister’s life.

Through the winter of 1944-1945 Sister Patricia fought a lung infection which culminated in a diagnosis of TB. She had a close brush with death and the only remedy was to come to Toronto and undergo surgery to remove part of the right lung. In due time she was able to return to Moose Jaw, but required a year of rest before she could work again.

After her health returned somewhat, Sister contributed further service in Community institutions in both east and west. St. Anthony’s Home, as well as Providence Hospital in Edmonton, all benefited from her work in this period of her life. Sometimes she was Nursing Supervisor; often her posting was to other departments. While Superior of St. Francis Hospital, Smiths Falls, from 1953 to 1959, she worked in the pharmacy and, with her father’s advice, kept a watchful eye on construction that was in progress. During these same years Sister completed a course in Hospital Organization and Management. This course, plus her pre-entrance training in business, attendance at various administrators and trustees institutes and a course in purchasing in 1964 enabled her to fill office positions. She even took shifts in x-ray and laboratory. Sister is especially remembered in Moose Jaw for “her guidance and assistance in initiating the Alumnae Association of the School of Nursing and for the skilled leadership of students and graduates when Director of Nursing”. Throughout these 25 years, however, Sister continued to have bouts of poor health and, after suffering infarct on May 18, 1970, she found herself facing early retirement. It was necessary for her to take up residence at the Motherhouse.

That fall Sister Patricia became a member of the Missionary Apostolate of the Suffering, sponsored by the Scarboro Foreign Mission Society. Under the tenets of this organization she tried to give meaning and value to the remained of her life as a religious. She was still sure of her “call”, but now she could no longer work. Members of the SFM group were obliged to “accept their suffering as coming from the Providence of God” and to offer them to Jesus with these words:

They were urged to believe “that pain purifies and can lead the soul to the highest perfection. Sister found in the daily Eucharist the strength to follow this creed, making the use of acts of Spiritual Communion, if she was not well enough to receive. Twice in the years between her retirement and her death, she tried to accept assignments out of the Motherhouse, but both times found within a few weeks that she was not able to manage.

A large part of the burden of sickness is loneliness. Fortunately Sister Patricia was skilled with her hands and was able to put in many hours making beautiful handcraft pieces. Occasionally, too, the chronically ill suffer the criticism of the more active and constantly they must cope with the immanence of death. In these two trials she stove to remain at peace and was notable for her usually calm, uncomplaining demeanor. She volunteered to assist with tasks that she could manage, such as assembling the Courier each month.

Since Sister’s condition did not required that she reside on Marian II and she kept pretty much to herself in her room on the first floor, no one was with her when she took a stroke on the morning of July 23, 1987. The stroke left her partly paralyzed, unable to speak and scarcely able to swallow. She lived for almost two weeks more in Hotel Dieu Hospital before dying of pneumonia a complication following on the stoke. About 9:50 on the morning of August 3, the hospital nursing staff found that she had passed away.

In many of her spiritual notes, Sr. Patricia Rashotte mentions her great desire to be aware of God’s presence and to live in him. Through and in her suffering she sought that end, trusting God to be there for her, especially in virtue of His forgiveness. Let us join with her in the confidence that He will receive her well.