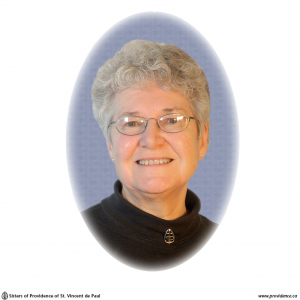 Margaret Josephine (Peggy) Flanagan born on February 27, 1938 in Newmarket, Ontario was the second youngest of five children of William Flanagan and Alice Bell. She grew up in the small community of Schomberg, Ontario.

After graduating from Toronto Teachers’ College, she taught for a year then entered the Congregation of the Sisters of Providence of St. Vincent de Paul on September 8, 1958. She came to know the Sisters when she taught at Sacred Heart School in King. The early years in the Community were difficult for her but she said that Vatican II came along just in time for her. She welcomed the changes in the Church and Community. After making her First Profession of Vows, she supply taught in Kingston from 1960 to 1963. For the following ten years she taught full time at St. John’s then St. Joseph’s Schools in Kingston, Sacred Heart in King and St. Paul’s and Holy Family  Schools in Kingston. She also assumed the responsibility of principal in a number of these schools. While teaching she attended summer school at the University of Ottawa and graduated with a B.A. in 1971.

In 1973 she attended the program at Divine Word Centre in London, Ontario at a time when many priests and Sisters were leaving religious life. She recognized that this experience was an excellent test and a strengthening of her own vocation. Her research paper was based upon her experience as a volunteer visitor in the Kingston prison system.

In the fall of 1974 she was missioned to Winnipeg, Manitoba to care for emotionally disturbed boys. When St. Joseph’s Vocational School closed in 1979, she was asked to help open a group home in Winnipeg for six developmentally handicapped children. It was during that move that she was called home to be with her father who was dying in a nursing home in Newmarket. Her mother had died nine years earlier while she was principal at St. Joseph’s School in Kingston.

She lived in the group home at 129 Yale Avenue in Winnipeg for nine years. She was happy living with Sister Dorothy Hills and the residents there, but she decided to take the opportunity offered to her to have a year of renewal. She chose to study at Regis College in Toronto and was accepted into the two year Masters of Theological Studies Program which included the Forty-Day Institute at Loyola House in Guelph.

Before she was able to complete the course at Regis, she was elected in 1989 to a five-year term on the Leadership Team of the Congregation.

In 1989 she helped to establish a self-help group for Adult Children of Alcoholics in the Kingston area. This group, before it closed in 1993, was the impetus for the spinoff of several other similar groups in the city.

After completing her term on the Council she had a ten month sabbatical during which she took a facilitator’s course and was able to experience living alone, painting and writing. She was then asked to take over as General Secretary, a position she held from 1995 – 2002. Following this she continued to be involved with prison ministry and was active on Congregational Committees including Healing Violence and Responsible Sharing. She was also a faithful Vigil Keeper at City Hall every Friday for several years. Sister Peggy, who had a zest for life, blended humility with an intense commitment to make things better for the marginalized of society.

Sister Peggy was called home peacefully to her loving God on Thursday, February 12, 2015. The Mass of Christian Burial, held in the Chapel of Mary, Mother of Compassion, Providence Motherhouse, Kingston, on February 16th, was presided over by Most Reverend Brendan O’Brien, Archbishop of Kingston, accompanied by several members of the clergy. Rev. Patrick Kelly delivered the homily.