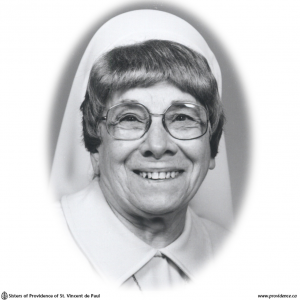 Philomena Martina Genore was born in Otter Creek, Ontario, on the 13 of October, 1909, one of nine children born to Albert Genore of Sorel, Que., and Mary Courneyea of Tweed. Philomena changed her name to Phyllis for personal reasons.

Phylllis had Grade IX education when she entered, having attended Otter Creek Public School and then took a year’s training at St. Joseph’s Hospital in Toronto when she had to leave because of illness. Her native language was French and her English gradually improved in the Novitiate. Prior to entering the Novitiate, she worked as a domestic in Toronto.

Following her Profession on March 19, 1937, as which she took the name of Sister Mary Emile, she was assigned to work with Sister M. Daniel in the printing shop where she learned to do the whole process from beginning to end. She took a short course in book binding from the Grey Nuns and put this skill to good use. For many years Sister Phyllis managed the Printing Office at the House of Providence, now Providence Manor. Always a perfectionist, Sister received only the highest praise for “jobs” well done for the Parish, for the City Merchants, and for the Community. Sister compiled and edited a monthly school magazine “The Guardian”; this publication, when withdrawn, was sorely missed throughout the separate school system and the magazine was not replaced.

Sister had to have open heart surgery in the early seventies, but continued to work within her limitations until she retired to Providence Motherhouse in 1990.

Sister Phyllis died on September 7, 1990, in the 55th year of her religious life. On September 10, Msgr. T.J. Raby, assisted by several priests, presided at the funeral Mass and the homily was delivered by Rev. J. Rozon.