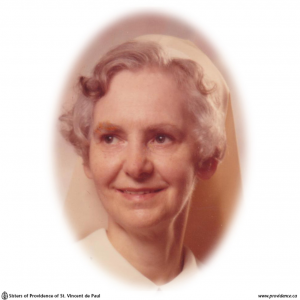 Newry is a good-sized city about 150 miles from Belfast in Northern Ireland. There, in 1887, Rose McParland was born. In the great wave of immigration that took place in the early 1900’s, she came to Canada to live with her uncle. Within a few years, she met and married Daniel McParlan, a native of Stanleyville, Ontario. Dan worked first for the Perth Shoe Company and then as a policeman. The couple raised a family of seven girls and four boys.

The first child was a girl, and they called her, Mary Regina. She has left us this description of her home:

“Being the eldest of a family of eleven children, I had to be on my best behaviour. My father and mother took responsibility seriously and carefully guarded me. We had close family ties, sharing and caring. I loved all my brothers and sisters; we seemed to understand each other. We all had the usual chores of washing dishes, cleaning the rooms, dusting, laundry and ironing. Mother was always in the home and available, a good listener.

We had celebrations on every occasion, including birthdays, with a delicious cake with icing. We had a big time at Christmas, getting small gifts – whatever could be afforded. There was lots of activity in the home, with card games, music, friends of all the children.  It never became a lonely place. We had fun making taffy, and eating it made us a happier bunch.”

The family home was near St. John’s Church, in Perth, and the children attended elementary school at St. John’s. For high school they went to the Perth Collegiate. Mary Regina’s choice of subjects led to a Commercial Diploma, so that, after Grade 10, she was able to obtain a position in the office of one of Perth’s most famous businesses, The Henry K. Wampole Company.

Regina’s description of her home continues:

“My family went regularly to Mass and Benediction and prayed the Rosary. We attended the forty Hours Devotion and yearly missions.”

So Regina became a very religious-minded young woman. She relates that she was an active member of the Children of Mary, attended Mass three times a week and frequented the sacraments. It was natural for her to take seriously the words of the priest who gave the parish mission in 1930, when he confirmed her opinion that God was calling her to become a sister of Providence. She consulted her Grade 8 teacher, Sister Mary Victor (Donegan) and, then, on June 28, 1931, she wrote to Kingston asking permission to enter. Two of her best friends, Florence Larocque and Nellie McGlade (Sister Mary Noreen) had gone ahead of her in January.

The answer to Regina’s letter was “Yes” and her parents gave her no opposition.

“My parents did not place any obstacles in my path. I was the first one of my family to leave home. My parents brought me to Kingston to the brown house at Heathfield. I began my postulants’ training, returning my secular clothes and putting on a black dress and veil and cap on August 15, 1931. After six months, I made my retreat at the House of Providence and received the Holy Habit.”

In religion, Regina took the name, Sister Mary Gwendolyn, but later returned to her family name when that option was given.

On August 15, 1933, as she pronounced her first vows her feeling was, “Jesus has planted me in a fruitful land where I may daily grow in grace and yield abundant fruit.” She knew there would be much effort needed and she set herself to engage in the daily combat necessary to gain virtue. She resolved to practice the constant presence of God and her spiritual notebooks show this to be a devotion that she faithfully kept to the end of her days. There are in her writing many lines such as, “I have spoken to Him at all times and tried to live in His presence.”

Sister’s first assignment was to assist Sister Mary Catherine (Dooley) in the office of St. Vincent de Paul Hospital, Brockville. She remained there only one year before going to nurses’ training at Providence Hospital, Moose Jaw. While in Moose Jaw, she made her final vows, repeating her aspirations to holiness:

“I willing give up everything for God and He will be everything to me…to work out my salvation, save souls for Him and return love for love.”

God accepted her desires and seem to have led her into three areas of fulfillment.

First she was to face for forty-six years the challenge of serving in the health care field. She obtained certificates, in nursing in Saskatchewan, Alberta and Quebec and was able also to work in the pharmacy, purchasing department and office of institutions in both East and West. Her tour of duty took her to St. Anthony’s home, St. Francis Hospital, St. Mary’s of the Lake, St. Mary’s Hospital in Montreal, Providence Manor, Father Dowd Home and the Motherhouse Infirmary, as well as St. Vincent de Paul Hospital and Providence Hospital, Moose Jaw. Her love of the poor, in the person of the aged and ill, led her to make herself available for their care. The only break she had from 1933 to 1981 was a short term as Superior of Rosary Hall in Toronto.

This task of being Superior was the second “testing ground” for Sister Regina’s desire to give everything. For fifteen years and in four different houses, she carried this responsibility along with that of her apostolic work. In this capacity she is remembered as combining gentleness with firmness. She sensed when exceptions to the Rule were called for and made them gracefully.

The third challenging area of life for Sister was her need to find a way to cope with poor health. It lead her to reflect often on death as the door to new life and she endeavoured to live in the joy of the resurrection. She admonished herself:

“Death is part of every one of us. We are all going to die and be raised again. Fill your heart with all the love and joy that living brings…Always be thankful. Be full of joy. Serve the Lord with gladness.”

Her concern for the quality of Community Life led her to include in almost every letter, a wish that others would enjoy themselves, too, “today, tomorrow and every day of their lives”. By her actions she tried to assist them.

In her retirement years, Sister Regina worked in the Dining Room at Heathfield, making sure that the Sisters’ section and the retreatants’ section were always ready for use. Despite increasing physical ailments she was usually at work. In the last week of May, 1986, she caught a cold and felt full of aches and pains, especially in the back. Early in the morning of June 1, she asked for a room on the Infirmary floor, but on the doctor’s advice she was soon moved to the Hotel Dieu Hospital. A temporary heart pacer gave her little relief, her family was called and the last sacraments were administered. By then, it was evening and Sister Nancy Wilson, Superior General, joined Sister Thomassina Whalen, who had been at Sister’s bedside most of the day. Sister Thomassina remained on into the night and was with Sister Regina when she died about 2:00 a.m. One brother, Edward, and his wife were also present. While her sudden passing caught many by surprise, no doubt Sister herself was well prepared.

“Death is not a wall, a disaster as non-believers think, but a doorway to a fuller life. We answer, ‘Yes’, to the question, ‘Do you believe this?’ Why grieve unnecessarily for Sister? We know we shall follow and we know where to find her.”

In describing her vocation Sister Regina had used the words of the psalmist, “I want to live in the house of the Lord all the days of my life.” By her cooperation with grace, her desire was satisfied both in this world and in the next.