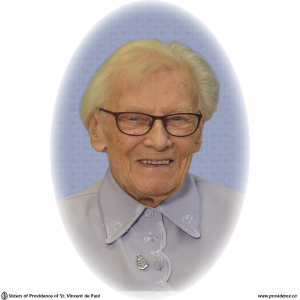 Rita Dimberline was born on February 25, 1919 in Hamilton, Ontario, the second of three children of Elizabeth Lynam and Leonard Dimberline.

In 1936 her family moved to King, Ontario, a settlement founded during the depression years by Father Francis McGoey. It was there that Rita first met the Sisters of Providence. Encouraged by Father McGoey, Rita entered the novitiate of the Sisters of Providence of St. Vincent de Paul on February 3, 1939. Following her First Profession of Vows in 1941 at which time she received the name Sister Mary Francis Xavier, she was assigned to the House of Providence in Kingston. In 1943 she went to St. Anthony’s Home, Moose Jaw to work with the elderly. In 1955 she went to St. Joseph’s Auxiliary Hospital, Edmonton for two years. During these years she was trained by the nursing Sisters. In 1957 she enrolled in the Registered Nursing Assistant program at St. Vincent de Paul Hospital in Brockville. After graduating, she continued nursing at Providence Manor, Kingston, Providence Hospital, Daysland, Alberta, Athabasca, Alberta, The Father Dowd Home, Montreal and St. Mary’s of the Lake Hospital, Kingston. While at St. Mary’s of the Lake she was active in the Nursing Assistants’ Association serving a two year term as local president and one term as provincial president.

In 1965 when OHIP was introduced, the doctors at St. Mary’s of the Lake Hospital formed an Association and requested someone to keep account of the visits and procedures in the hospital and make the monthly submissions to OHIP. Sister Rita was assigned to this work and continued in it until 1977. At this time she took the first part of the C.A.P.E. program at Kingston Psychiatric Hospital. In January 1978 she moved to Calgary to work in parish ministry for the next year and a half. She then went to Pincher Creek to continue in parish ministry until 1989. After a sabbatical in Arnprior, Sister Rita went to St. Vincent de Paul Hospital in Brockville to join the Pastoral Care Team. Around 1992 she moved to the Motherhouse where she was assigned as coordinator of one of the groups and was in charge of hospitality until 2000. She was also sacristan until 2003.She enjoyed knitting, reading and doing crossword puzzles. Sister was especially generous toward the less fortune and reached out to them in any way she could.

The Mass of Christian Burial, held in the Chapel of Mary, Mother of Compassion on October 5, 2017, was presided over by Friar Ed Debono, OFM Conv. Rev. Dennis McDonald, a close friend from Calgary, delivered the homily. Burial was at St. Mary’s Cemetery, Kingston.