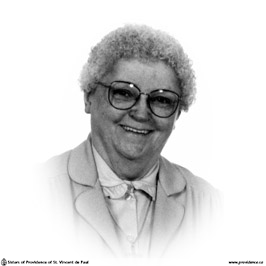 The late Sister Rita Killeen was born on March 2, 1921 in Perth, Ontario. She was the second youngest of eight children to bless the home of Alphonsus and Matilda (Egan).

Rita’s father worked in the mine in Timmins while his wife, and her mother, Tillie Egan, looked after the children. As years passed, Mr. Killeen’s health began to fail. Consequently, he stopped working in the mines and to the delight of the family, bought a farm in the country near Stanleyville.

When Rita was fifteen her mother suffered a stroke. She died at home within twenty-four hours with her family by her bedside. Father Walter Whalen was a great comfort to the family at this time of loss.

In 1939 Rita entered the novitiate of the Sisters of Providence of St. Vincent de Paul, Kingston. For a few years after profession of vows Rita served as portress and cook in several convents. In 1947 she suffered a great loss when her dear father died of lung disease.

In 1952 Rita took a childcare course in St. Louis to be trained to care for small children at St. Joseph’s vocational School in Winnipeg. For twenty-six years she was a mother to many young disturbed boys from broken homes. She loved them all and they loved her.

When St. Joseph’s closed in 1979 Rita trained as a pastoral care worker and worked on the palliative ward and on the Geriatric ward at St. Boniface Hospital. After living in Winnipeg for forty-one years Rita returned to Kingston, Ontario. Here, she visited patients at St. Mary’s of the Lake Hospital. During this time she met Father Michael Reed, whom she asked to sing at her wake and to preach the homily at her funeral.

All through her life Rita suffered from ill health. She had a total of eleven operations. Perhaps it was her own experiences as a patient that made her so compassionate and understanding toward the people she visited.

People who worked with Sister Rita and knew her well often described her as God’s pet nun, who was attentive, tolerant and always pleasant to the patients. Her style was simple and completely unsophisticated, the approach of one who holds God in awe. She was, in the words of one doctor, the “salt of the earth.”

Sister Rita was thankful to have been called to religious life and she was happy and contented in her vocation. She always had a smile to share with everyone. In her later years Rita made time to spend two hours, or more, every day in prayer before the Blessed Sacrament. Here, she placed in God’s care all those who recommended themselves to her prayers. She followed up by telephoning friends to ask how things were going for them.

At her wake many friends and relative shared stories that told how deeply Sister Rita had touched their lives. Sister Rita is predeceased by her parents, Alphonsus and Matilda (Egan), by brothers, Alphonsus and William, by Sisters, Margaret SP, Aileen, Dorothy and Carmel SP. She is survived by her brother, Gerald (Ethel) of Winnipeg and sister-in-law, Christine of Sudbury.

Mass of Christian Burial was held in the Chapel of Mary Mother of Compassion, Providence Motherhouse on Saturday, March 2, Sister Rita’s 81st birthday. The homilist, Father Michael Reed, said that Sister Rita must have studied under the Patch Adams School of Care, because she left her patients smiling, and often even laughing. She was a precious bundle of joy who will be missed on earth, but who will help to light up heaven, where she is now in a position to help us in ways we may not understand.