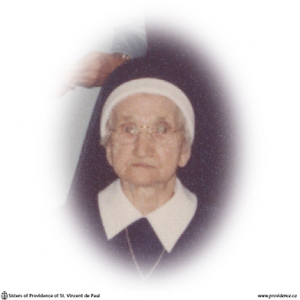 On August 24, 1982, Sister Rosaleen Sullivan died at Hotel Dieu Hospital, Kingston. She was the eldest member of the Sisters of Providence of St. Vincent de Paul, having reached the age of 96 years and 7 months. For the last sixteen years of her life she had been a patient in the Marian Infirmary of the Motherhouse.

Rosaleen was the daughter of Michael Sullivan and Mary Callaghan of the parish of Marmora, Ont., and the last survivor of a family of ten. When she applied for admission to the Novitiate her pastor, Father J. J. O’Reilly, sent this terse note to the Community: “Rose Sullivan of the Sacred Heart parish at Marmora is worthy of my best recommendation.” Those who remember Father O’Reilly, a man of few words, would appreciate this commendation.

Rosaleen had trained as a nurse before entering the Novitiate and so, after profession as Sister Mary Blandina on July 30, 1930, she resumed her service to the sick in the various hospitals of the Community – St. Francis, Smiths Falls; St. Vincent de Paul, Brockville, St. Mary’s of the Lake, Kingston, St. Mary’s, Camrose, and Providence Hospital, Daysland. She had taken special training in x-ray and pharmacy and took charge of these departments when there was need. She served a term as Local Superior in Daysland, and during her last assignment at St. Mary’s of the Lake she acted as Assistant to the Superior.

In 1966 she retired to the Marian Infirmary. For a few years she was blessed with good health and was able to enjoy the companionship of her fellow sisters and the visits of her relatives. One of these was a nephew, Charles Auger, whose godmother she was, and who was faithful in visiting her even when in her later years she frequently did no recognize him.

In 1968, when a new religious name was no longer given to Novices making profession, Sisters previously professed, who wished to do so, might revert to their baptismal names, Sister Mary Blandina was among those who made this choice and became known again as Sister Rosaleen Sullivan.

In November, 1977, a fall in her room caused a fracture of a hip and she was obliged afterwards to use a wheel chair. Her strength gradually declined and her mental faculties lost their keenness.

On August 20, 1982, she showed signs of more than usual weakness. The doctor was called and came again on the 23rd, diagnosed her illness as pneumonia and advised having her admitted to Hotel Dieu. Sister Gracia Whalen accompanied her and remained until 11:00 p.m. Father McNally, hospital chaplain, visited her and gave her the last absolution and the plenary indulgences. But, as it was thought she was not in immediate danger of death, Sister Gracia came home. At 3:00 a.m. on the 24th a call came from the hospital that Sister Rosaleen had died.

The funeral Mass was celebrated by His Grace Archbishop F.J. Spence with concelebrants Fr. Paul McAvoy and Fr. Egbert Stang, OMI. Fr. Stang was conducting Sisters’ retreat in the Motherhouse as the time. His Grace gave the homily. Surviving relatives who were present were her faithful nephew, Charles Auger, another nephew G. McWilliams of Peterboro, and a niece, Mrs. Rita LaPlante, with her daughter, Mrs. Beth Elmherst, of Toronto.

Sister Rosaleen was a quiet person with a cheerful disposition and a refreshing sense of humour. She had musical talents, could supply as organist when required and loved to sing. She often entertained the attendants in the infirmary with songs of her childhood days. On the last night of her life, while being prepared to leave for the hospital she sang: “O, dear, what can the matter be, Johnny’s so long at the fair?” May we hope that with Francis Thompson she is continuing her Songs of Innocence in the nurseries of Heaven.

The Local Superior of her last active mission, Sister Mary Hagan, summed up our memories of Sister Rosaleen in these words: “A fervent religious, with good practical common sense, an excellent nurse, a genial companion, loved by all – Sisters, secular staff and patients.”