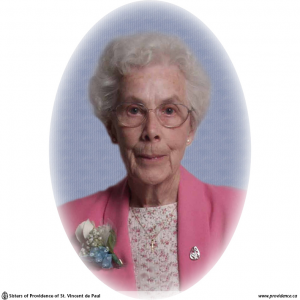 Being one of nine children, she grew up in a loving and faith filled family on the outskirts of Picton. She received her elementary education at St. Gregory’s Catholic School in Picton and her first year of High School at Picton Collegiate followed by three years at Notre Dame Convent in Kingston.

She entered the novitiate of the Sisters of Providence of St. Vincent de Paul on September 8, 1946.

Following graduation from Toronto Normal School in 1952, she taught at St. Mark’s School, Prescott, Sacred Heart, Batawa, St. John’s, Perth, St. Malachy’s, Montreal, St. John’s College, Brantford and St. Mary’s, Trenton. After completing business courses at the Ontario Business College in Belleville, she worked in the Motherhouse Business Office and then at St. Mary’s of the Lake Hospital in Kingston. She then taught Grade 9 and 10 Business Courses at Nicholson Catholic College in Belleville.

In 1982 she went to St. Joseph’s Hospital, Edmonton to work as an assistant to the accountant. In 1984 she returned to Kingston where she worked in Pastoral Care at Hotel Dieu Hospital and took a Clinical Pastoral Education Course and a Pastoral Care Course in Ottawa.

She was called home peacefully to her loving God on November 12, 2011. The Mass of Christian Burial held in the Motherhouse chapel on November 16th was presided over by Friar Ed Debono, O.F.M.Conv., who also delivered the homily.