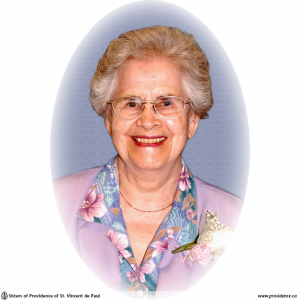 Sister Rose Bekar was born in Bayard, Sask., November 21, 1918, the twelfth of thirteen children born to Joseph and Ludvina (Maierhoffer) Pekar. Her parents immigrated to Canada in 1913 from Austria and settled on the vast prairies of Saskatchewan.

She attended the local, rural two-room school with one room for high school students. She experienced the “Great Depression” during these years but she never felt deprived or poor since living on a farm there was always nourishing food. Each evening her father led the rosary followed by a few litanies and prayer for rain which never came. As a result the family experienced the dust storms resulting in the loss of valuable top soil, the army worm plague and the grasshopper plague.

Her ambition was to become a nurse. Providence Hospital, Moose Jaw was 35 miles away. To enter the school of nursing she needed money and a job in Moose Jaw. She obtained a job at the Children’s Shelter across from Providence Hospital doing the laundry for fifteen dollars a month, plus room and board. She soon became adept at running the large laundry equipment from 5:00 a.m. to 7:00 p.m. with Sunday and Thursday afternoons off.

She frequently attended Mass and Benediction at Providence Hospital and at St. Joseph’s Parish Church. Attending the Mother of Perpetual Help Devotions brought her into contact with the Redemptorist Fathers. The rector tried to convince her that she had a religious vocation which was not in her plans for the future. But after being told that she would lose her soul if she ignored the call, she eventually decided that there was only one way to settle this so that she could get on with her life. She entered the postulancy in February 4, 1938 and prayed that she would be sent home. Her frequent “Oh why did I ever come” was not made any easier when her three companions left one by one. And neither did she prove to herself that she did not have a vocation and until that was settled she would stay.

Her first mission was to Anthony’s Home, Moose Jaw in June 1940. Mother Victoria, General Superior, called her in to tell her about her assignment and assured her that she would become a nurse once the war was over. Her application at Providence Hospital School of Nursing had already been accepted for March 1938.

In April 1947 she was missioned to a new venture, the establishment of a hospital for chronically ill and aged women. With two other Sisters she went to Vancouver. She was named the Superior and so Holy Family Hospital came into being. On May 14, 1953 sod was turned for the construction of the first 52 bed unit.

In September 1953 she left for St. Mary’s Hospital School of Nursing in Montreal graduating in September 1956 the recipient of the Gold Medal for General Proficiency.

In November of 1956 she was missioned to the newly completed St. Joseph’s Auxiliary Hospital in Edmonton where she did one year of general duty and four years as Director of Nursing Services.

In September of 1961 she went to St. Mary’s Hospital in Montreal as Nursing Supervisor. While there she took the Hospital Administration, Organization and Management Correspondence Course from the Canadian Hospital Association, Toronto. In September of 1965 she went to St. Mary’s Hospital in Camrose as Administrator. From 1976 to 1988 Sister Rose was Administrator of Providence Hospital in Moose Jaw. In 1983 she was named Executive Director of both St. Anthony’s Home and Providence Hospital. In 1988 she received the Provincial Smith-Walshaw award for outstanding Service in Health Care. That same year she retired from active health care service and moved to Edmonton as a volunteer at St. Joseph Auxiliary Hospital and served as Vice-President of Providence Health System for three years working in Mission education as well as serving on St. Joseph’s and St. Mary’s Governing Boards.

Sister Rose was a capable administrator, able to empower the staff who worked with her and taught them through her generous ways. She was always there for her staff and patients. Her generosity and gratitude were shown to the Hospital Board Members, to the other Sisters who worked with her and to the staff. Sister Rose was truly a giant in the health care systems of the western provinces.

Sister Rose moved to the Motherhouse infirmary in October 2005 when her health began to fail. She was called home to her loving God on December 10, 2014.

The Mass of Christian Burial, held on December 16, 2014 in the Chapel of Mary, Mother of Compassion, Providence Motherhouse, was presided over by Most Rev. Brendan M. O’Brien, Archbishop of Kingston, assisted by other members of the clergy. Friar Edward Debono, OFM Conv. was the homilist.