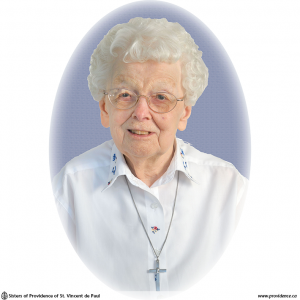 Rose Collins was the fifth of six children born to Joseph Collins and Harriet Lajoie on February 18, 1916 in Hungerford Township.

She attended St. Carthagh’s Separate School in Tweed, Ontario and the Tweed High School and in 1936 she graduated from the Ottawa Teachers’ College. She then taught in the elementary schools until she entered the novitiate of the Sisters of Providence on September 14, 1942. As a postulant and novice she taught at St. John’s and St. Mary’s Schools in Kingston.

Following her First Profession of Vows, at which time she received the name Sister Mary Bernard, she returned to teaching being assigned to St. John’s School, Perth, where she taught Grades 6 & 7 for one year followed by one year teaching Grades 3 & 4 boys at St. Francis Xavier School in Brockville. She was then assigned to St. Francis de Sales School in Smiths Falls as Principal where she remained for 35 years. During her years of teaching, she frequently had charge of the altar boys, and did church work. She was also Superior of St. Francis Convent for 6 years.

After her retirement from teaching she attended the Toronto School of Theology for one year. Then she was assigned to Providence Hall in Belleville to start a residence for girls who, for various reasons needed a home. After 6 years as Superior there and due to the lack of Sisters to help in this work, she was transferred to St. Joseph’s Convent in Belleville where she was assigned as Pastoral Assistant at St. Joseph’s Parish. She assisted with marriage preparation and with classes for people wishing to know more about the Catholic Church. During this time she served as lector, Eucharist minister, was a member of the parish council and the diocesan pastoral council auditing for the Kingston Marriage Tribunal.

In September of 2002 she and Sister Sara MacDonald closed St. Joseph’s Convent in Belleville and took up residence at the Motherhouse. In January 2003 Sister Rose suffered a broken hip. She recovered to the point where she could get around with the use of a walker. As time went on this became more and more difficult and eventually she was confined to a wheel chair. In spite of her confinement she maintained her cheerfulness and her wonderful smile. She always kept interested in her former students and colleagues who respected and admired her leadership and kindness.

The Mass of Christian Burial, held in the Chapel of Mary Mother of Compassion, Providence Motherhouse on September 23rd was presided over by Friar Ed Debono, O.F.M.Conv. Rev. Michael Reed was homilist. Several members of the clergy were in attendance as were many family members and friends.