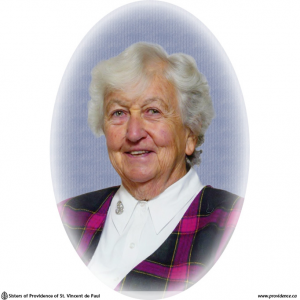 Rose Healy was born on April 29, 1924 in Smiths Falls, Ontario, the second of six children of Edmund Healy and Isabel Smith. She grew up on the family farm which her father had inherited from his parents. She received her elementary education in the rural school close to her home. While attending St. Michael’s Academy in Belleville for the first two years of secondary school, she lived with her uncle and aunt along with her sister, Mary. At the end of the two years they returned to Smiths Falls where she and her sister attended the Collegiate Institute.

Rose entered the postulancy March 19, 1943 and following her fist Profession of Vows in 1945 she attended Teacher’s College in Toronto. Her teaching ministry began in 1946 in the primary grades in Kingston, then Toronto and Trenton until 1954. In 1955 she received her BA from Queen’s University, Kingston. She then embarked on teaching high school at St. Michael’s Academy and Nicholson Catholic College in Belleville. She taught English, History, Mathematics and Biology in Grades 11, 12 and 13. In 1962 she taught Grades 9 – 12 Typing, Bookkeeping, Chemistry, Religion and English at Providence College, Brantford.

In 1967 she volunteered to go to the missions and so went to Peru as a missionary ministering as a Pastoral Agent. In 1978 when changes were made to the catechetical program she recruited and trained Catechists. She initiated in their parish a method of evangelization of the family which originated in Chili. She and a Providence Associate directed the Parish Press which was an important element in their evangelization. By 1984 her work was primarily family catechesis which was fundamentally a process in which Base Christians Communities were formed. She was also an assessor of the Christian Workers’ Movement.

In 1985 she was elected to the General Council. During her term of office she was a participant in the Group Home for girls, a member of St. Vincent de Paul Hospital Board, a member of the Board of Dawn House Women’s Shelter, and of the Kingston Archdiocesan Peace and Justice Committee and a participant in the Kingston and District Refugee Action group.

She returned to Peru in 1990 and was invited to a meeting to organize the Family Catechetical Program and became an assessor for it. In 1991 she became Treasurer for the Oscar Romero Retreat Centre and served on the Board of Directors. In 1997 she and Sister Rose Marie Bokenfohr became members of the Association which directs the Centre. In March 2011 she returned to Canada with Sister Irene MacDonell and took up residence at the Motherhouse.

Sister Rose died peacefully on Good Friday, April 18, 2014 in the 72nd year of her religious life.

Sister was a cheerful, compassionate and deeply spiritual person with a special devotion to Mary in her Magnificat. She endeared herself to her students in Canada as well as to the people throughout Carabayllo, Peru as she listened to them, encouraged them and accepted them for who they were.

The Mass of Christian Burial, held in the Chapel of Mary, Mother of Compassion, Providence Motherhouse, on April 23, 2014 was presided over by Most Reverend Brendan M. O’Brien, Archbishop of Kingston. Rev. Jack Lynch, SFM who had worked with Sister in Peru was the homilist.