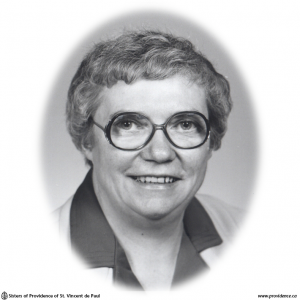 Rose Marie Catherine Scanlan was born on January 13, 1929, in Belleville and was baptized just one week later at St. Michael’s Church. She was the only daughter of Terence V. Scanlan and Rose Alice Fahey and obviously her father’s favourite. Her brothers recall that she could ‘twist him around her little finger’. There were four boys: Tome, who died at age 13, Jack and Louis, who still live in Belleville and Bernard, whose home is in Scarborough. It was a lively, devoted family. Mr. Scanlan managed a plumbing and heating business and so was able to provide comfortably for them.

Rose Marie attended St. Michael’s Academy. She is remembered as ‘a joy to have in a class…a very conscientious student, concerned that the classes were not being taught sufficient religion’. When se was in Grade 3 she was invited to join a children’s band under the tutelage of Sister Mary Mercedes (Leahy) and the instrument offered to her was the snare drum. The band had just acquired the drum with proceeds from a social evening put on by the Holy Name Society. As a member of this band, which became quite famous in Ontario, she had the wonderful experience of traveling to music festivals, helping to win many prizes and honours, and even entertaining the King and Queen of England when they visited Kingston in 1939. Rose Marie had inherited musical talent from her father’s side of the family, so she easily fitted into this remarkable group of youngsters. Her father’s love of music led him to arrange for her to take piano lessons also. Her teacher for this instrument was Sister Mary Bibianna (Keilty).

Being a good student, Rose Marie had no difficulty completing four years of high school. She did not go further at that time because she decided instead to answer a call from the Lord and enter religious life. She first made her vocation known to her family when she was only fifteen, but her father asked her to wait a year or two and see if the ‘call still persisted. Sister Mary Bibianna’s advice was the same.

It was therefore, August of 1946 before she became a postulant of the sisters of Providence of St. Vincent de Paul at the Motherhouse in Kingston. Her letter of recommendation from Monsignor J.F. Nicholson advised that she was a girl of ‘excellent character and splendid qualities’. But, clever and good as she was, there were things for her to learn. Her companions loved to tease her by recalling that, when she was on kitchen duty and Sister Mary Roberta (Connolly) sent her to baste the fish, she returned with needle and thread.

O making her first vows – August 15, 1948 – Rose Marie took her father’s name and became Sister Mary Terence. Her first assignment was to study Grade 13 subjects at Glen Nevis. She hoped to become a music teacher like Sister Mary Bibianna, whom she much admired, and the Community agreed to this plan. Although at the time she had only Grade 9 piano and three of the required written subjects, she took a few piano pupils and played the church organ. On one occasion she had no time to practice with the guest soloist for an important wedding party and the rendition was ruined. Whether that incident had anything to do with the change in her career path, she never knew, but after Glen Nevis she was sent to Teachers’ College in Toronto. In the first summer after Teachers’ College, she obtained a certificate in Elementary Vocal Music for she was possessed of a pleasant singing voice. She was launched then on a fruitful career in the classroom.

During the years 1950 to 1958, sister Mary Terence taught in Newmarket, Belleville (St. Michael’s Academy) and Arnprior. Through summer courses she upgraded her teaching qualifications and completed a Bachelor of Arts degree from Queen’s University. She was the first Sister of Providence to publicly receive a degree at convocation. She was ready then to move into the high school level of the education apostolate. By 1962 she held a High School Assistant Certificate and by 1968 was specialized in Mathematics, Science and Latin. During this period she served on the staff of St. Michael’s High School, Belleville, and Providence College, Brantford.

In the summer of 1970 Sister Rose Marie (she had by now returned to her baptismal name) and Sister Mary Teresa Cole became the first Sisters of Providence to study in Europe. Their courses were at the London University and before returning home they added to their education by visiting Ireland and touring the continent.

Sister Rose Marie saw another part of the work in the summer of 1976 when she gave up her holidays to relieve the Sisters of the missions in Guatemala. She had become an excellent cook so her assistance was most welcome. She also did sewing and helped in the apostolate in whatever way she could. She was to repeat this generous deed in 1984, after having studied Spanish.

From 1973 to 1985 Nicholson Catholic College in Belleville was Sister Rose Marie’s work place and she added computer science to the subjects which she taught. For a few years she had her sights set on a Master’s degree in education; but, never one to confine her activities to the classroom she became involved with social justice issues and found herself planning instead to take a sabbatical and then seek an assignment to the foreign mission field. Until that could become a reality, she did what she could from Canada to assist the poor abroad. She was instrumental in the establishment of the Quinte branch of the Canadian Catholic Organization for Development and Peace (CCODP), serving as chairperson from 1982 to 1985 and providing spiritual guidance for the group.

God, however, had different plans for this talented and generous woman. The Chapter of the Sisters of Providence in the spring of 1985 elected her to the General Council. Her leadership qualities had been spotted many years before. In 1970, for example, she had chaired a revival of the Sisters of Providence Teachers’ Convention. She was a willing worker, community minded and prayerful, yet fun-loving, and so had much to recommend her for this important role of Councillor.

When the Council met, to her delight it was decided that she should proceed with the sabbatical that she had planned, returning to the Motherhouse about every third weekend for the necessary meetings. Sister chose the Galilee Renewal Program given at the Oblate house in Arnprior. Her classmates that year remember her as ‘always cheerful and hopeful, friendly and gracious, gentle and caring. She was loved for her great reasoning and for the strength she gave to others, never letting her difficulties or problems rest on them’, The many trips back and forth to Kingston she seemed to take in stride, drawing on her great reserve of energy.

That year the Community rejoiced in a year-long celebration of 125 years of service. Sister rose Marie was asked to chair the committee which would guide this extensive plan. Throughout the year, she probably shared with her Galilee companions some of the ongoing developments and setbacks which she experienced. The outcome was wonderful in every way, thanks to the sills, the gentleness, the good humour and patience which she brought to the task.’ The work involved the coordinating of many activities. Major among these were the setting up of a heritage parlour and arranging an outdoor gathering of Sisters, relatives, friends and government officials for August 17. For this latter event, she, herself, was chairperson.

Just before the August anniversary assembly, Sister Rose Marie kept a doctor’s appointment. It was then that she learned she had breast cancer and would require major surgery. Bravely she kept this diagnosis to herself until after the celebration. Having admired the excellence of her performance, it was with amazement that everyone heard the disturbing news.

The follow-up treatment which Sister received after the surgery was not too rigorous and she was able to continue working. Over the next few months she reported minor aches and pains to doctors but they saw no connection to the cancer. Therefore, it was baffling to discover, about a week before Christmas, that the disease had invaded both lungs. The shock was doubled three days later when doctors decided that a loss of feeling in the left hand was caused by tumours in the brain. Sister Rose Marie reacted with great courage. She kept busy as long as she could putting her personal and family affairs in order. On December 31 she submitted her resignation as a Councillor. By early January she was confined to the Infirmary. There she celebrated her 57th birthday, surrounded by her family, including her mother who was able to come from Providence Manor.

During her rapidly progressing illness Sister Rose Marie showed a remarkably joyful anticipation of death. She prayed that it not be delayed and, in God’s mercy, it was not. Sister Rose Mary Ryan, who had been nursing her most caringly for two or three weeks, was praying with her on the morning of January 31, when Sister Rose Marie fervently asked the Lord to come and take her. She had absolutely no fear of meeting Him face to face. Then, conscious to her last breath, she passed to the next life at 9:15a.m.

Sr. Rose Marie Scanlan’s funeral Mass used readings and music that she had selected herself as she reflected on her life. In a sense they were (as Fr. Pat Kelly pointed out in his homily), her last effort to tell her life’s message. The message was reinforced by the presence of an honour guard of students from Nicholson Catholic College and representatives of the CCODP. Archbishop F.J. Spence presided, accompanied by twenty-two other priests. In lieu of Mass offerings, many expressed their sympathy by giving donations to relief work in Guatemala.

The Kingston Archdiocesan Committee of CCODP has established in Sister Rose Marie’s honour an annual lecture series. On November 29, 1987, the first of these addresses was delivered at a Memorial Mass in the Providence Motherhouse Chapel. The service also marked the twentieth anniversary of CCODP. Miss Denise Boilard, a close friend and former student of Sister Rose Marie, was the speaker and she chose to pay tribute to Sister’s memory. This testimonial is given as an appendix to this necrology.

Among the Sisters of providence of St. Vincent de Paul, Sister Rose Marie Scanlan was notable for her concern for social justice. Mary the freedom of the children of God, which she longed to obtain for everyone, be her just reward.