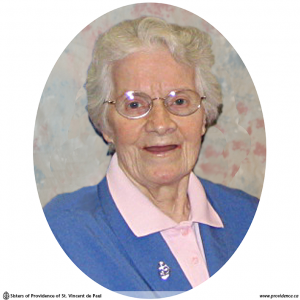 Sister Rose Mary Ryan (Theresa Doris Ryan) was born on December 17, 1929 in Picton, Ontario, one of nine children of Jane Gannon and William Ryan. She was blessed with a twin sister, Dorothy Sarah, Sister Rose Anne. She grew up in a very happy family home which was located outside the town of Picton. She attended St. Gregory’s Catholic Elementary School and Picton High School for grade nine. She then attended Notre Dame High School in Kingston for one year. During the summers of 1944 and 1945 she worked at St. Vincent de Paul Hospital in Brockville where she enjoyed her experience of working with the Sisters. She had already met the Sisters of Providence of St. Vincent de Paul in Picton when she was in grade eight at the time of the Sisters’ arrival there to teach. Sister Mary Berna (Mary LeSage) had been her teacher. The Sisters’ spirit of joy helped her to make her decision to enter religious life.

She and her twin sister, Dorothy Sara, Sister Rose Anne, entered the novitiate of the Sisters of Providence of St. Vincent de Paul in Kingston, Ontario, on August 15, 1946. Sister spent many years as housekeeper and cook in Maryvale Abbey, Glen Nevis, St. Michael’s Convent, Belleville, St. Mark’s Convent, Prescott and St. John’s Convent, Perth. She spent two years at St. Joseph’s Vocational School in Winnipeg as Assistant Supervisor of the boys, a ministry she enjoyed. In 1969 she graduated with honours from St. Mary’s School of Nursing, Montreal as a Registered Nurse. After four years of general duty nursing at St. Mary’s Hospital which were very happy years for her, she was assigned to Providence Manor in Kingston as supervisor and general duty nurse. In 1974 she went to St. Mary’s of the Lake Hospital, Kingston to begin and develop the first Medical Day Hospital Program in Ontario. She remained there until August 1986 and then had a sabbatical year at Galilee in Arnprior. On her return from her sabbatical in 1987 she began a new career with the Nursing Registry in Kingston. This involved doing private duty nursing for dying people in their homes. This was night work within the city of Kingston as well as in the surrounding area. She enjoyed this work and felt privileged to be with the dying and their families. In 1988 she was asked to go to Gabriel Home to work with the young unwed expectant mothers. Following this ministry she was asked to work at the Loretta Hospitality Centre to oversee and help prepare a hot noon meal for those in need. Sister Rose Mary remained in this ministry until ill health necessitated her withdrawal.

She was called home to her loving God at Providence Motherhouse, Kingston, Ontario, on August 18, 2011. Sister Rose Mary is predeceased by her parents, her sisters, Loretta Gunn, Mary and Jean and her brothers, Thomas, Vincent, Daniel, Leo and James. Sister is survived by her twin sister, Sister Rose Anne Ryan of the Sisters of Providence of St. Vincent de Paul of Kingston. She will be fondly remembered by her sister, relatives, and friends and by the members of her religious community. The Mass of Christian Burial, held in the Chapel of Mary Mother of Compassion, Providence Motherhouse on August 22, was presided over by Friar Edward Debono, OFM Conv. Msgr. Don Clement was the homilist.