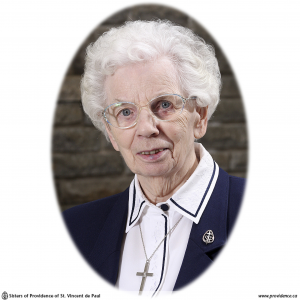 Sister Sarah MacDonald, of the Sisters of Providence of St. Vincent de Paul, died peacefully following a brief illness on January 6, 2014 at Kingston General Hospital in the 71st year of her religious life.

She was born in Trenton, Ontario on May 28, 1923, the fifth of nine children of Mary Fitzpatrick and Edward MacDonald. She attended St. Peter’s Separate School and Trenton High School. After completing Grade 13, she entered the novitiate of the Sisters of Providence of St. Vincent de Paul on February 2, 1943. Following her First Profession in 1945, she attended Toronto Normal School.

Her teaching career, mainly in Grades 1–4 in the Ontario Separate Schools, took her from Gananoque to Prescott, Kingston, Trenton and Belleville. She also served as Superior of the convents in Gananoque and St. Joseph’s, Belleville.

While teaching she was involved in parish work including sacristan and the training of altar servers, as well as teaching catechism to children not attending the Catholic schools, and during the summer months to the children in the rural parishes. During her teaching years, she took courses in education, vocal music, primary methods and junior education offered by the Ministry of Education. She also took several university courses at Queen’s University and the University of Ottawa.

After retiring from teaching in 1988, she remained in Belleville and assisted as Parish Visitor, visiting the hospital and nursing homes as well as continuing sacristy work and training altar servers at St. Joseph’s Parish. She also was a Eucharistic Minister, which she considered a great privilege.

She moved to the Motherhouse in Kingston in 2002 with the closing of St. Joseph’s Convent. Sister Sarah was always very hospitable and highly respected and loved by her family and those to whom she ministered in her teaching and parish ministries.

The Mass of Christian Burial, held in the Chapel of Mary, Mother of Compassion, Providence Motherhouse, Kingston on January 11, 2014, was presided over by Most Rev. Brendan M. O’Brien, Archbishop of Kingston. Msgr. Don Clement delivered the homily.