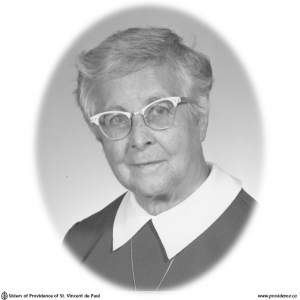 Sarah Ann Howell, one of 11 children, was born on January 2, 1909, to Elizabeth McNamara and Andrew Howell in Marysville in the Township of Tyendinaga.

At the early age of 16, Sarah entered the Sisters of Providence after attending Notre Dame School in Kingston. She completed Grade XII in Glen Nevis. She made profession on August 29, 1927, taking the name of Sister M. Jovita but reverted to her baptismal name Sarah, after the December 1967 Decrees. Her sister, Mary, (Sister Mary Florence) had entered the congregation six months earlier. Both sisters made profession on the same day.

Sister Sarah taught for 42 years in various schools in Eastern Ontario and was also principal at St. Francis Xavier School, Brockville, and at Sacred Heart School, King. A learned scholar, Sister completed her B.A. degree at Queen’s University, Kingston, and the M.A. requirements except for the thesis due to ill health.

Clergy, parents and students extolled Sister’s great humility, charity, and ability to communicate the most difficult subject content with the greatest patience and perseverance. Doctors, clergy and many professionals declared their successes were due to Sister Sarah’s expert guidance and instructions: “Best teacher we ever had”, they said.

Sister possessed a joyful spirit; there was always a smile and a word of encouragement to those students who came ‘after hours’ for extra help. She loved her two families: her immediate family and her community sisters, and reached out to help whenever and however the occasion called.

Sister Sarah had a great interest in arts and crafts and for her own personal fulfillment, studied in Ogdensburg, N.Y., several summers. Sister continued to develop her interest in oil painting by attending night school in Prescott. She produced some beautiful paintings, two of which were quite special. One was a winter scene which hung in St. Mark’s Convent, Prescott, until its closing. The other was an autumn scene donated to Providence Hall, Belleville. It is now at the Motherhouse.

Sister Sarah died on October 14, 1992, in the 67th year of her religious life. At the funeral Liturgy, celebrated by Monsignor Raby, accompanied by several members of the clergy, Sister’s many accomplishments were eulogized, especially her generosity and dedication as a Christian educator. Her sister, Mrs. Loretta Black, and some of her nieces and nephews attended the ceremonies.