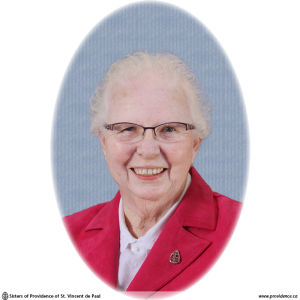 Sheila Brady was born in Perth, Ontario on March 28, 1936 the youngest of four children of Marguerite Wilson and Hugh Brady. In 1939 her mother died leaving her father with four young children. Her father’s sister, Marie, moved in to care for them. Two years later her father remarried gifting them with a wonderful stepmother, Olive Lee Noonan, whose husband had died leaving her with a daughter who became an older stepsister. Sheila grew up surrounded by loving grandparents and relatives. She attended St. John Catholic School and Perth Collegiate.

She entered the novitiate of the Sisters of Providence in Kingston September 15, 1954. After her First Profession she went to St. Mary’s Hospital in Montreal to train as a nurse and graduated with her RN in 1961, receiving an award in Bedside Nursing. She was then missioned to St. Francis Hospital in Smiths Falls and placed in charge of Obstetrics for a year. After taking a Nursing Administration program she became Director of Nursing for four years. From 1966 – 1968 she was Director Nursing at St. Vincent de Paul Hospital in Brockville. During this time, she graduated from the Canadian Hospital Administration diploma program. She spent two more years back at St. Francis Hospital in Smiths Falls. In 1970 she was missioned as Director of Nursing at Providence Hospital, Daysland, Alberta. In 1974 she was assigned as Assistant Administrator of St. Mary’s of the Lake Hospital in Kingston and the following year became the Administrator. In 1980 she had a sabbatical year and took the program, Focus on Leadership, in Denver, Colorado. She then went to St. Mary’s Hospital in Camrose, Alberta as Executive Director.

In September 1987 she and Sister Muriel Gallagher were asked by the Leadership Team to form the Providence Health Team to advise them on concerns in the health ministry and to be members of the western Hospitals and Home Boards and committees in Vancouver, Edmonton, Camrose and Moose Jaw. In 1990 she moved back to Kingston to be Vice-President of the Providence Health System. She was missioned to oversee Providence Manor and St. Mary’s of the Lake Hospital in Kingston and St. Vincent de Paul Hospital in Brockville.

In 1994 she was elected as Councillor and Assistant General Superior for a 5-year term. Among other duties she was assigned Corporate Health Councillor and again was involved in the Congregation’s health facilities across Canada.

In 1999 she enjoyed a sabbatical year which included eight weeks at the desert House of Prayer in southern Arizona and six weeks at Queensland in Victoria, BC. By the end of this sabbatical time, she felt drawn to prison ministry which she pursued upon her return to Kingston. She remained in this ministry until her health necessitated her retirement in 2015.

During her years in health care she was a member of the Canadian College of Health Service Executives for 12 years. While in the Providence Health System, she completed a course in Facilitation of Adult Groups in Huntsville in 1993 which was helpful in mission integration programs. As well she served on all eight Hospital/Home Boards and committees and on the Catholic Health Associations of Alberta in the mid 1980’s and in Ontario from 1995 – 1999. She was also the Chair of the Sponsors Alliance in Catholic Health Care in Ontario from 1997 – 1999. As CEO of St. Mary’s of the Lake Hospital and on the Governing Board, she was a member of the Queen’s Health Sciences Council.

Sister Sheila died peacefully in the infirmary on November 25, 2019

The Mass of Christian Burial, held in the Chapel of Mary, Mother of Compassion, Providence Motherhouse on November 30, 2019, was presided over by Friar Ed Debono, OFM Conv., who also delivered the homily. Burial was at St. Mary’s Cemetery, Kingston.