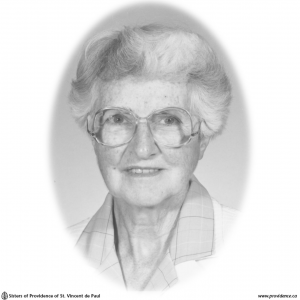 Shirley Teresa Dunn was born in Winnipeg, on December 30, 1908, the daughter of William Henry Dunn and Mary Ellen Hatpin. Shirley was one of thirteen children who knew a happy family life and strong parental support. Mr. Dunn was an architect and builder whose work took him from Ottawa to Winnipeg.

Shirley’s life reflected the qualities of her strong mother who managed her household after her husband’s tragic death. Mr. Dunn died of pneumonia resulting from a fishing accident in 1913. Mrs. Dunn was a policewoman on the Winnipeg Police Force from 1916-1920, and manifested gifts of management and compassion. She prepared her children for First Communion and Confirmation in the living room on Sundays and some of the Catholic children down the street attended her preparation classes. Mrs. Dunn married Joseph Guerin, a policeman on the Canadian National Railway, in 1916. After only two years of marriage, her second husband was shot on duty, another devastating loss to the family.

Shirley entered the House of Providence on September 29, 1927. Six months later her sister Vera (Sister Mary Joan) entered the Sisters of the Holy Names of Jesus and Mary. Shirley made first profession July 29, 1929, taking the name of Sister Mary Angelica, but reverted to her baptismal name in 1967*. After profession she went to Edmonton with four other sisters to prepare the newly acquired building for the official opening of the House of Providence, Edmonton, AB, later known as St. Joseph’s Hospital. In September that year, Sister went to train St. Mary’s Hospital School of Nursing, Camrose, AB. After obtaining her R.N., she went back to St. Joseph’s Hospital to work as a nurse until 1936. She then took a laboratory technologist course at the University Hospital, in Edmonton and used these skills in Daysland, Edmonton, Kingston and Vancouver.

Sister Shirley became a certified Hospital Administrator in 1962. From 1966-1975 she was the administrator at St. Vincent de Paul Hospital, Brockville and served on the General Council from 1965-1971. During her tenure as administrator in Brockville, many great changes took place. It was a period of positive growth for the hospital and a time during which Sister Shirley fostered a true loyalty amongst all the members of the staff and a real pride in the hospital as a result of her devoted and inspirational leadership. Because of Sister Shirley’s inspiring personality, the hospital gathered around itself a family of really true friends who shared her vision of the mission of the Sisters of Providence in Brockville.

During Sister’s years in Brockville, a fully equipped ophthalmological out-patients and surgical service was introduced. Sister played a leading role in guiding the hospital through three accreditation surveys which gave an unqualified endorsement of the high standards of total medical care available to the citizens of Brockville. She left behind a spirit of love, loyalty and a true care and compassion for others.

On her retirement from St. Vincent de Paul Hospital, she returned to Holy Family Hospital in Vancouver and was superior from 1977-1983. Sister was also superior in Daysland and Edmonton. At the request of the Catholic Health Council of Saskatchewan, through Archbishop Charles A. Halpin of Regina, she was asked to act as administrator of St. Joseph’s Hospital, Ile a La Crosse, and the hospital at LaLoche, SK, in the diocese of Keewatin-LePas. Providence Hospital, Moose Jaw, SK, sacrificed their food supervisor, Sister Marie Dumont, to accompany Sister Shirley. After six months, the Sisters of St. Elizabeth replaced them in the hospitals. In these isolated places enjoyed the delight of spring and summer, the lakes and the peaceful untouched nature. The Chipewayan, Cree and Métis they served were respectful, friendly, joyous and industrious. The Grey Nuns continued to provide nursing service and thus the two Sisters of Providence filled a gap where the need was great.

During her many years in Vancouver, she witnessed to the Sisters and all visitors a wonderful hospitality through driving, preparing meals, shopping, and visiting the sick and the lonely in their homes.

Sister Shirley died of cancer on August 30, 1993, at Marian Infirmary in the 66th year of her religious life. Archbishop F. J. Spence, accompanied by several priests, presided at the funeral liturgy and delivered the homily. Many friends and doctors who worked with her in Brockville joined in the celebration of her life. Mr. Gregory Moore, Mr. Tom Barr and Dr. Douglas Wight felt honored to be pallbearers for this great lady.