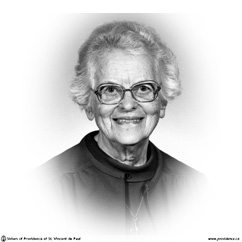 After a very long and fruitful life, Sister Stella McRae died on August 3, 2003, at Providence Motherhouse, Kingston Ontario. Born on July 9, 1902 in Bainsville near Glen Nevis, Ontario, Stella and her nine siblings were brought up on a farm in Curry Hill. The eldest of the family, Stella learned early in life to shoulder responsibility and how to master the skills it took to help manage a large household. One of her brothers remembered that Stella accompanied him to Kingston when he was young boy to have eye surgery, performed by the famous Doctor O’Connor. She was, he remembered, a gentle sweet lady and very pretty too. At that time Stella stayed for several days at the House of Providence. The kindness shown her by the Sisters no doubt influenced her decision to enter religious life. Stella was a great help to her parents and it must have been difficult for them to allow her to follow a call to religious life and enter the congregation of the Sisters of Providence on December 8, 1920. Nevertheless, they freely gave their daughter to God. Her cousin, Alice Downey, Sister Mary John entered the congregation twenty-three years after Stella. Shortly after Stella entered, her family left the farm and moved to NY where Mr. McRae found employment for a time in an aluminum plant. Sadly, he was injured on the job and never worked again. Stella’s mother lived through many hard times but her strong faith always stood by her. Her example caused her husband to embrace the Catholic faith late in life. She saw the importance of education for her children and was delighted that two of her daughters graduated as registered nurses. Stella was her mother’s pride and joy and her rare visits to the family home were occasions of great joy. All the members of her family would often say they depended upon Stella’s prayers to see them through many hard times. Although Stella did not have the advantage of higher education she successfully fulfilled the responsibilities of her many assignments through the years, including that of superior on several missions both in the West and in the East. Sister is survived by one sister, Mrs. Mary McCabe of Ogdensburg, NY and by her niece, Nancy Wright of Rochester, NY. Sister Stella is predeceased by her parents, George and Catherine (Downey), by five brothers and by three sisters. She will also be fondly remembered by her Sisters in religion.

Archbishop Emeritus Francis J. Spence, assister by several members of the local clergy, presided at the Mass of Christian Burial held in the Chapel of Mary Mother of Compassion on August 6, 2003.