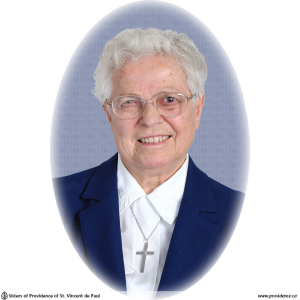 Stella Szybisty was born on July 19, 1926 in Janatowica, Poland, the second of two daughters of Elizabeth Cisto and Joseph Szybisty. Her family immigrated to Canada in 1930 and settled on a farm in Polonia, Manitoba where she and her sister attended the local schools and worked on the family farm.

She entered the novitiate of the Sisters of Providence of St. Vincent de Paul on September 15, 1948 and made her First Profession on August 15, 1950. Her first assignment was as housekeeper at St. Carthagh’s Convent in Tweed where she also studied piano and theory. Between 1955 and 1975 she was housekeeper in the convents in Trenton, Prescott, Montreal, and at the Community’s Group Homes in Kingston. From 1975 to 1976 she worked in the dining room and was chauffeur at the Motherhouse. In 1978 she spent a short time in the mission at San Cristobal, Totonicapan, Guatemala then returned to the Motherhouse. From 1979 -1981 and from 1986 – 88 she once again served on the mission in Guatemala. When she returned to Canada she was assigned to the Group Homes in Kingston, then Rosary Hall in Edmonton, Providence Hall in Belleville and finally to St. Joseph’s Parish in Brantford for pastoral ministry. In 1988 she enjoyed a sabbatical year at the Galilee program in Arnprior and took the CHAC Pastoral Care course in Ottawa. She was then assigned to pastoral ministry at St. Michael’s Parish in Pincher Creek, Alberta. In 1990 she went to St. Anthony’s Home in Moose Jaw to minister in pastoral care and in 1995 she transferred to Providence Place, Moose Jaw. In 2005 she returned to the Motherhouse where she assisted the Coordinator of one of the Community groups.

Sister Stella was called home peacefully to her loving God on May 3, 2016 after a long illness. She will be remembered for her deep faith, her generous and compassionate spirit as well as her sense of humour which she never lost even during her illness.

The Mass of Christian Burial, held in the Chapel of Mary, Mother of Compassion, Providence Motherhouse, Kingston on May 5, 2016 was presided over by Most Rev. Brendan O’Brien. Friar Ed Debono, OFM Conv. delivered the homily.