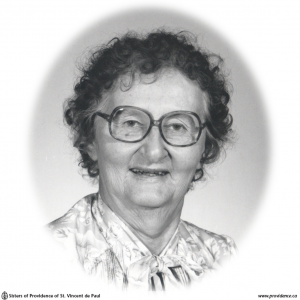 Thecla (Tatiyana-Maria) Zuzak, one of five children, was born in Quarrel AB on august 28, 1909, the daughter of Anastasia Muryn and Roman Zuzak of the Ukraine.

Tatiyana-Maria worked in the kitchen at our hospital in Daysland with Sister M. Marcella before entering. During that time she and Sister Mary Eucheria became very good friends. When Sister M. Eucheria was transferred to St. Mary’s Home, Tatiyana followed her. It was from St. Mary’s that she decided to enter the Sisters of Providence on August 15, 1935. She and Evelyn Dolan traveled to Kingston by train dressed as postulants so that she could travel half fare. Tatiyana made profession on August 15, 1937, taking the name of Sister Mary Agatha. As Sister belonged to the Ruthenian Rite, she received permission from the Apostolic Delegate in Canada for her to enter the Latin Rite before being admitted to perpetual vows. With the publication of the December 1967 Decrees, Sister decided to take the name of Sister Tatiyana-Maria Zuzak.

After profession, Sister went to Rosary Hall, Edmonton, to be in charge of the dining room. This was the beginning of her career of 49 years in the Dietary Departments of St. Mary’s Hospital, Camrose, St. Joseph’s Hospital, Edmonton, and St. Mary’s Hospital, Daysland. She also looked after the dietary needs of the Sisters in Prescott, Belleville, Brantford and Edmonton. Sister remained in Camrose 19 years and found it very difficult to bid farewell to the staff and sisters. She preferred working in the hospitals because there was always a good staff with whom to work; on the teaching missions, many other tasks had to be done besides looking after the dietary needs of the Sisters. She was very dedicated to her work and, although she was not a dietician, was a good manager in the kitchen and a provider of good food.

Sister Tatiyana-Maria’s cooking skills were appreciated by the sisters with whom she lived. She introduced them to many Ukrainian dishes such as cabbage rolls and perogies. She went out of her way to do many unusual things for them and was very kind to those who taught in the schools. She even insisted on packing them nourishing lunches if they were unable to come home for the noon meal. She loved to put on a banquet and celebrate in style with a delectable meal, delicious buns and unique decorations for the event. Sister Tatiyana, even in her later years, not only used her tried and true recipes, but was often very innovative with new ones, some that she clipped from the Toronto Star or Brantford Expositer. Whenever she was at the cottage on Howe Island, she liked to get up early in the morning to watch the sunrise and observe any small animals that might be around. Sister frequently baked buns early in the morning as a special treat for the sisters who were on holidays with her.

After her retirement from the dietary field, Sister Tatiyana attended a renewal program at the Galilee Mission Centre in Arnprior. She loved the program and kept in contact with several friends she made while there. After her sabbatical and recovering from a bout of cancer, she took a trip to Europe with Sister M. Jerome and visited Fatima, Lourdes, Medjugorje and tome. Much of their traveling in Europe was done by bus but they sailed from Rome to Medjugorje.

Sister Tatiyana-Maria died on December 5, 1993, in the 6th year of her religious life. At the vigil service, the Sisters paid tribute to Sister’s many culinary gifts, her compassionate care of others, her gentleness, her thoughtfulness, her kindness, her love for her family and her affectionate respect for priests. Although she gave the impression of a stern woman, deep down she was young at heart, a free spirit and a wonderful loving woman. At the end of the vigil service, her family gathered around her casket. Her nephew, Father Edward “Eddy” Yarema, led them in Ukrainian prayers of the dead, which conveyed to us Sister’s roots and expression of her faith. One of her close friends, Rev. Phil Reilly, C.R., came from Brantford to attend the vigil and funeral.

Archbishop Francis J. Spence, accompanied by several priests including her nephew, presided at the Funeral Liturgy in the Chapel of Mary, Mother of Compassion, on December 8. Rev. Leo Byrne, another close friend, delivered the homily. Mrs. Anne Truba, her sister, and several nieces and nephews from the Toronto area joined the Sisters of Providence in the celebration of our beloved Sister Tatiyana.