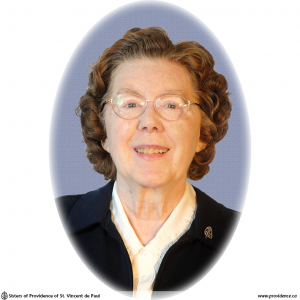 Theresa Matthews was born in Toronto on June 16, 1930 the eldest of six children born to Florence Casey and Charles Patrick Matthews. She received her early education at St. Vincent’s School in Kingston and her secondary school diploma from Notre Dame High School, Kingston. Upon graduation in 1948, she attended the University of Ottawa where she obtained a Diploma as a Registered Nurse in 1951, a Nursing Education Certificate in 1953 and a Bachelor of Nursing Science in 1955.

Theresa entered the novitiate of the Sisters of Providence of St. Vincent de Paul on September 8, 1962. After making her First Profession in 1965 at which time she took the name, Sister Mary Benedict, she was assigned to the School of Nursing at St. Mary’s Hospital in Montreal as an instructor. In 1967 she went to St. Mary’s of the Lake Hospital in Kingston as a relief Director of Nurses. The following year she was sent to Providence Hospital, Moose Jaw to do in-service education where she remained for two years. In 1970 she returned to Kingston where she was assigned as Infirmary Assistant to Sister Mary Alban. During that year she took a course in the Sociology of Health and Medicine at Queen’s University. In 1971 she had surgery at St. Mary’s Hospital in Montreal and spent three months convalescing at the Father Dowd Home. While there she was able to relieve the Sisters on duty there for their weekly day off. In 1971 she returned to St. Mary’s of the Lake Hospital in Kingston as an Employee Health Nurse. In 1974 she became Director of Employee Health Services. In 1980 she took the Occupational Health Nursing Program completing Module I, Occupational Hygiene and Health Surveillance as a part-time student at St. Lawrence College, Brockville.

From September to December 1993 Sister Theresa attended a renewal program at Saint Stephen Priory Spiritual Life Center in Dover, Massachusetts. From February to June 1994 she participated in Wellsprings; a program for Christian ministries in Glen Falls, New York. Following her sabbatical year, she returned to Moose Jaw where she ministered as a Sister Pastoral Associate at Providence Place. In 2005 she returned to the Motherhouse in Kingston where she was assigned as sacristan. After a relatively short illness, Sister Theresa was called home to her loving God on Saturday evening, February 19, 2011. Sister Theresa, being a very unassuming and private person, dearly loved her family and her religious congregation.

Her family members as well as several relatives attended the Vigil Service and funeral. Her brother, Rev. Carl Matthews S.J. of Toronto presided over the Mass of Christian Burial held on February 22nd in the Motherhouse Chapel. Msgr. Don Clement delivered the homily. Other members of the clergy were also in attendance.