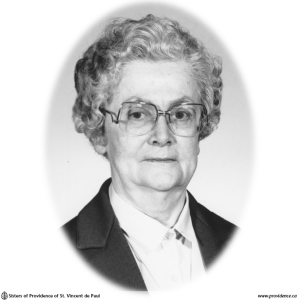 Mary Agnes Whalen was born on October 17, 1915, in Stoco, Ontario. At the time, her parents Thomas Whalen and Alice (Doran) had five other older children, three girls and two boys. Three of Mary Agnes’ siblings were called to their eternal reward before her. Mary Agnes was somewhat small growing up but she could hold her own when the going got rough. Some described her as a real ‘tom-boy’. She received her early education at Point Anne Public School and at St. Michael’s Academy in Belleville.

On August 15, 1933, Mary Agnes, then in her 18th year, answered what she discerned to be God’s call to religious life, by entering the Novitiate of the Sisters of Charity of the House of Providence, Kingston, now known as the Sisters of Providence of St. Vincent de Paul. In his letter of recommendation her parish priest described Mary Agnes as a young lady of fine character, sterling piety and exemplary conduct. He went on to say that she was one of the finest fruits of the Catholic school and he trusted that she would persevere in the great vocation to which she aspired. It was said that the day Mary Agnes entered she informed the portress that she had come to stay. And stay she did.

Mary Agnes chose, for her religious names, Thomassina, the feminine version of her father’s name, Thomas. It must have given her special joy to have present at her final vow ceremony on August 15, 1938, her elder Sister Winnifred, who entered the congregation two years after herself. Her grandfather Whalen boasted in his later years that he had four granddaughters and five nieces in the Sisters of Providence.

In the early years of her religious life, Sister Thomassina cared for young orphans and elderly women. She also served as housekeeper at Apple Hill, and as portress at Heathfield until she embarked upon her mission as Supervisor of Food Services, first in Kingston and then in Montreal. This area of ministry seemed to suit Sister and so in 1955 she earned her B.Sc. Nutrition from the University of Montreal. It was noted that Sister received her assignments in French and had to translate them all into English before she completed them with a very high degree of efficiency. This was, no doubt difficult for her, but it also awakened in her heart compassion towards the French speaking girls who came to St. Mary’s and who had to cope with the English language. Sister did her dietetic internship at St. Mary’s Hospital, known as the Mayo Clinic, in Rochester, Minnesota. She was later sent on to study dietetics, nutrition and management in order to meet the requirements of the Corporation of Dieticians of Quebec, and so was well prepared for her role as director and teacher of Therapeutic and Clinical Nutrition Services at St. Mary’s Hospital, Montreal, a four hundred and fourteen bed hospital operated by the Sisters of Providence. She held this position until 1981 when she started another career in pastoral care at the same hospital. Before embarking upon this new mission, Sister availed herself of the excellent pastoral care program offered by St. Paul University, Ottawa. In all, Sister Thomassina spent almost forty years serving her God in the person of the sick in St. Mary’s Hospital, Montreal.

In 1984 Sister attended the Credo Program of Religious studies at Gonzaga University, Spokane, Washington. As part of her sabbatical that year, she was privileged to join a pilgrimage to the Holy Land. However, her faith must have been sorely tested when she tripped and broke her ankle thus cutting short this eagerly anticipated opportunity.

Upon her ‘retirement’ to Providence Motherhouse, Sister accompanied many Sisters to clinics and hospitals. She was more than a companion because she made it her business to ask questions and to get to know the best possible care suitable for every Sister, and she was determined that they should get it. She was soft spoken, but her words were very firm and strong. She generously gave of her time, even when very tired herself, to sit by the bedside of the sick and dying, and she never drew attention to her magnanimous service toward others. Sister was a wonderful confidant. Others who confided in her knew that she would never breathe to another soul what was entrusted to her.

Through the years, Sister Thomassina and her Sister Winnifred, affectionately referred to as “Tommy” and “Winnie” by their family, often visited their many relatives, especially at times of crisis, but also at times of joy and celebration. Sister’s death on the feast of her baptismal patron, St. Agnes, was sudden and a shock for every one, especially for Sister Winnifred. However, most who knew her agreed that it was the way Sister Thomassina would have wanted to return to her God, with as little fuss as possible. At her Wake, several of Sister’s relatives and friends, as well as her Sisters in religion, shared heart-warming stories which illustrated her humanness, her kindness, and the ways in which she quietly touched the lives of numerous people.

The Mass of Christian Burial on January 23rd was attended by an overflowing crowd and included her cousins, Rev. Msgr. F. O’Neill and Rev. B.F. O’Neill. Music was led by Albert Dunn, who will miss Sister Thomassina at his weekly choir rehearsals. The celebrant and homilist, Rev. Msgr. D.P. Clement, offered his condolences to those who mourn Sister’s passing but also encouraged those present to thank God for the life of this good woman who used her talents wisely, and who loved her God faithfully. She will, he said, be welcomed into the presence of the Father by those who she helped on the same journey before her. Those who loved Sister Thomassina are encouraged to celebrate the gift she has been, and still is, to us all.