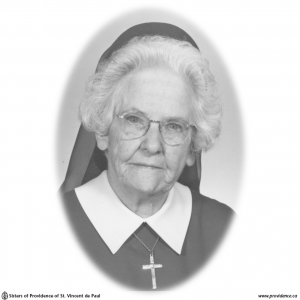 Verna Elizabeth Plue was born on March 31, 1901, in Actinolite, Hasting County, ON, the daughter of Edward Plue and Catherine Conway. Verna was the youngest and only girl in a family of six. With five brothers, Verna was subjected to a lot of teasing and frequently her mother had to come to her defense.

When Verna was eleven years old, her mother fell in a frozen ploughed field and injured her spine. Paralysis gradually spread upward until she became completely paralyzed, causing her death in 1912. Following her mother’s death, the broken-hearted father decided to accept the offer of Elizabeth Laton, Mrs. Plue’s sister, to care for Verna. Her aunt treated her like one of her own children and Verna felt that she belonged to this family of four girls and one boy. One year later Mr. Plue drowned in Belleville and the five boys were split up and put in different homes.

Verna continued her education at St. Michael’s School in Belleville and completed Grade 9 junior high. One of her teachers, Sister M. Philomena, made a great impression on Verna and she decided “That is what I am going to be”. She included Sisters Mary Loyola, Teresa (Mangan) and Zita in her final memories and among those who influenced her. Although her brothers urged her to wait until she was twenty-one to maker her decision, Verna asked to be admitted to the novitiate of the Sisters of Providence when she was sixteen. She was accepted on August 6, 1917 and in her own words, “never regretted it and would never have exchanged her life as it was for anything.”

Verna made her profession of first vows on August 28, 1919, taking the name of Sister Mary Cosmas. After she made profession, Sister Mary Cosmas went to Glen Nevis for two years where she completed her studies and then went to Ottawa Normal School. Now, ready to teach, Sister Mary Cosmas was assigned to Arnprior for a year and then moved to Smiths Falls where she remained for four years. Subsequently, she was missioned to Brockville, but was there only a few months when she became ill. Her doctor, believing that she had TB, recommended that Sister be sent west, “the farther the better”. This proved to be a wise decision, and upon her recovery in 1928, because of her affinity for little children, Sister Mary Cosmas was sent to Little Flower School in Rossdale Flats Edmonton. She remained there for twenty-one years. The unusual little yellow schoolhouse also served as a church when needed and Sister served as sacristan as well as teacher. When Sister Mary Cosmas left Little Flower School in 1950, she was replaced by a dear friend, Sister Mary Faustina, who remained there until the school had to be closed in 1971. Although times were hard during her years at Little Flower School, since there was no funding for separate schools in Alberta at that time, Sister Mary Cosmas’ love for the children and her involvement in music ministry, as well as in the classroom, made it all a joy. She said that it broke her heart to leave. Later, Sister was sent to live at St. Mary’s Home for Boys, and to teach at St. Francis’ School for a year. From there she was stationed at St. Joseph’s Hospital and taught at St. James School for a year, at which time Archbishop McDonald asked her and her companion, Sister Mary Kenneth, to move to the new St. Peter’s School. Some Ursuline Sisters were coming to Edmonton and would be taking up residence in a house owned by the diocese near St. James School.

In March 1968, Sister Mary Cosmas decided to return to her baptismal name of Verna. After teaching for seventeen years at St. Peter’s, Sister Verna retired in 1969 and moved to Rosary Hall, where she was the receptionist and, as she said, ‘jacks of all trades. In 1974 Sister Verna retired to Providence Motherhouse, Kingston, Ontario. For more than twenty years she continued to keep in touch with many of her former pupils in Edmonton, as well as to nourish and renew friendship in the east. Like most elderly people, Sister Verna loved to have visitors and to reminisce with them. One of her fondest memories was a holiday which she and Sister Dorothy Hills enjoyed together and which included a trip along the Pacific coast and a tour of the famous rose garden in Portland Oregon. She was always grateful to her Superior at the time, Sister Mary John, for arranging this vacation for her and her friend Dorothy, at a time when they both really needed it.

As Sister Verna’s physical infirmities increased through the years, she continued to embrace life fully and to inspire others by her deep spiritual life, by her hospitality which warmly welcomed everyone who visited her, and by her rich sense of humour which kept a bright twinkle in her clear blue eyes. Some other qualities, which one heard Sisters, relatives and other friends recall concerning Sister Verna, were her generosity, her sense of gratitude,  her love of flowers, her love of poetry, her gentleness and wisdom. One of her poems which she loved was shared at her wake:

“Autumn’s pale leaves withered and dying,
Beautiful lily that lasts for the day
Mists of the morning on the wreath’s vine
Tells us how swiftly we’re passing away
Heaven our home, heaven our home
Soon we will be going to Heaven, our home.”   (Anonymous)

Just a few weeks before her ninety-fifth birthday, Sister Verna suffered a stroke from which she never recovered. She returned home to her God on March 1, 1996 in the seventy – ninth year of her religious life. She is sadly missed but fondly remembered by her nieces as well as by her Sisters in religion, former pupils and other friends and relatives. At her funeral liturgy on March 2, Rev. Msgr. T. J. Raby remarked that he wished he had known Sister Verna because everything he heard said about her at her wake impressed him so much. Although he did not know her personally, he did know that Sister Verna saw Jesus in the little children she taught and in all whose lives she touched. He invited all present to thank God and to celebrate the gift of Sister Verna’s long and full life.