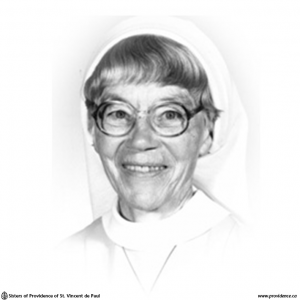 Sister Winnifred Callary died of cancer on Tuesday, December 16, 2003, at Providence Motherhouse in Kingston, Ontario. Born in the family home in Outremont, Quebec on November 11, 1917, she was the fifth child of seven children born to Helen (Mullen) and Owen Joseph Callary.

Winnifred received her elementary and high school education from the Sisters of the Holy Name of Jesus and Mary at Bon Secours Academy in Outremont. Following graduation she enrolled in Miss Flanagan’s Secretarial School in Montreal for the Pitman Stenographic Course after which she was employed at Eaton’s Restaurant Office in downtown Montreal. Later she worked as a stenographer in the Personnel Department of the Royal Bank of Canada.

During the war years (1939-1944) she followed the Devotions of Our Mother of Perpetual Help at St. Ann’ Church and joined the Legion of Mary Praesidium along with her good friends, Mary Rayson (Sister Mary Gerald Francis) and Isobel Mackey each of whom played an important role in her life.

Through the years, she bowled, skated, skied, took long walks in the spring and fall and played tennis during the summer.

Winnifred was encouraged by Father Gerald Koster and Bernard Johnson CSsR to pursue a call to religious life. Since Father Koster’s sister, Sister Mary Cecile, was a Sister of Providence of St. Vincent de Paul, she was directed to consider this Congregation. With the blessing of her family, Winnifred, together with Mary Rayson (Sister Mary Gerald Francis) and Eunice Sugars, was received into the postulancy on March 19, 1946. These three postulants were frequently referred to as the raisins, sugars and calories!

Following her first Profession of Vows, Sister Winnifred was admitted to St. Mary’s School of Nursing in Montreal from which she graduated in 1951 with a Special Honour Gold Medal in Nursing Proficiency. Two years later she did six months postgraduate studies in obstetrics at the Margaret Hague Maternity Hospital in Jersey City, NJ, USA. She returned to St. Mary’s Hospital where she was assigned to the Department of Obstetrics. Always able to call people by name, Sister Winnifred was a very compassionate and caring nurse. In 1959 she obtained a B.Sc. Diploma from the University of Montreal. In 1963 Sister was transferred to the Obstetrical Department at Providence Hospital in Moose Jaw, Saskatchewan,

Sister Winnifred had, from her school years, greatly desired to serve in the foreign mission. So in 1967 when the missions in Guatemala and Peru opened, she was chosen to serve in San Cristobal, Totonicapan, Guatemala, as a nurse and pastoral care worker. While ministering in Momostenango, she taught the women sewing. As a result, one woman set up a business in sewing so that she was able to make a living. After a short stay in Peru and twenty-two years of missionary work in San Cristobal and Momostenango, where she was greatly appreciated by the people, Sister returned to Canada to minister in pastoral care at Providence Manor in Kingston until she retired to the Motherhouse in 2001.

Sister’s nephew, Stephen Callary and his wife, her sister-in-law, Nora and her daughter, Mary, attended the funeral.

Sister Winnifred is survived by her brother, Edward (Nicole) of Calgary, Alberta. She will be fondly remembered by her relative, her friends and the members of her religious congregation.

Archbishop Emeritus Francis J. Spence, assisted by other members of the clergy, presided at the Mass of Christian Burial, held December 19th in the Chapel of Mary, Mother of Compassion. Msgr. Thomas Raby, in his homily, commented on how she was “a refreshing spirit to the people she served.”