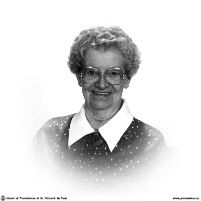 Mary Winnifred Whalen was born November 2, 1913, to Alice Doran and Thomas Whalen in her grandparent’s home in the town of Bogart, Hungerford Township, County of Hastings. She was the fifth child in a family of six children – four girls and two boys.  When she was a young child, the family moved to Point Anne, Ontario, where her father was employed by the Canada Cement Company. She received her early education at the Public School in Point Anne.

On February 15, 1935, Winnifred was accepted into the Novitiate of the Sisters of Providence. For Winnifred the Novitiate was a happy time. She made her First Profession of Vows on March 29, 1937, and two days later she went to the House of Providence to help care for the elderly. She recalled how those residents, who required very little care, assisted the Sisters in their work because there was no lay staff at that time.

In August 1943, Sister Winnifred was transferred to St. Joseph’s Vocational School in Winnipeg where 120 boys, ages 6 to 16 years, were under the care of the Children’s Aid Society. The Sisters attended to the training, health and comfort of the boys. Two years later she was sent to St. Anthony’s Home in Moose Jaw, Saskatchewan, where she remained for eight years caring for the elderly. In 1953 Sister Winnifred returned to the House of Providence where she was privileged to care for her aging parents until their deaths. In 1959 she was transferred to Rosary Hall in Toronto, a boarding home for working girls and students. She served as Food Supervisor, Superior and celebrated her Silver Jubilee during her time at Rosary Hall. In 1965 Rosary Hall was demolished necessitating a move to a new location on St. George Street, which she over saw. That same year she returned to Winnipeg as Superior of St. Joseph’s Vocational School. This time there were approximately thirty emotionally disturbed boys cared for by the Sisters and social workers. In 1971 she went to St. Joseph’s Hospital in Edmonton, a hospital for the chronically ill. During the next twenty-one years, Sister Winnifred held the positions of receptionist and switchboard operator, and worked in the accounts department. She also filled the position of Superior for two terms.

In 1992 at the age of 80, after, as she describes, having enjoyed a long and happy religious life and having endured many years of arthritis, after which two knee replacements restricted her activities, Sister Winnifred retired to the Motherhouse. She spent her time visiting the Sisters in the infirmary, praying, reading and knitting.

A prayerful woman with a great sense of humour, Sister Winnifred always enjoyed a party. One Sister described Sister Winnifred as “the greatest Superior one would ever wish for. She taught us to be mature people.” Another Sister remarked that she had wonderful healing hands in attending to others.

At her wake her relatives shared stories that expressed the loving bond that existed between Sister Winnifred and her family and how she had touched their lives.

Sister Winnifred is predeceased by her parents Thomas and Alice (Doran), her sisters, Helen MacDonald, Mary Summers and Sr. M. Thomassina (Mary Agnes), and her brothers John and Michael.

The Mass of Christian burial, held in the Chapel of Compassion, Providence Motherhouse on Wednesday, February 18 at 10:30 a.m. was presided over by Most Reverend Anthony G. Meagher, Archbishop of Kingston, assisted by Archbishop Emeritus Francis J. Spence and several members of the clergy.

Msgr. Thomas Raby, in his homily, quoted from the Catechism of the Catholic Church “Religious Life in its various forms is called to signify the charity of God in the language of our time.” (926) He pointed out “the language of our time is in the cry of the poor, the sick, the oppressed and the forgotten. Sister Winnifred did just that in the places she was sent to and in the works she was given to do … So Sister, we comment you to God’s loving mercy and ourselves to your prayers.”