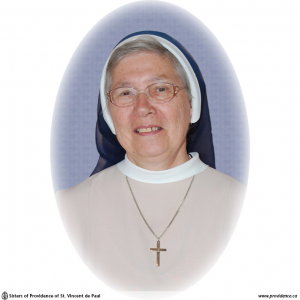 Sister Yvonne Patry was born in Athabasca, Alberta on August 31, 1933 the first of three children of Blanche Dion and Joseph Henry Patry. She received her education at the Athabasca Public School and the High School.

She entered the novitiate of the Sisters of Providence of St. Vincent de Paul on September 12, 1953. Following her First Profession of Vows, she attended Toronto Teachers’ College followed by 32 years of teaching in the Catholic Elementary Schools of Ontario which took her from Kingston, Batawa, Trenton, Prescott, Smiths Falls and Gananoque. For about twenty-five years she was an active member of the Legion of Mary. Following her retirement from teaching she worked as a Red Cross homemaker in Smiths Falls for four years and another six years in Picton before being transferred to Belleville in October 2001 where she became Pastoral Assistant at St. Michael the Archangel Parish. As Pastoral Assistant she visited the schools teaching the children to make and pray the rosary. She established Junior Legion of Mary groups with the primary students from St. Michael and Our Lady of Fatima Schools. She also had a role in preparing students for Reconciliation and First Communion. Her other duties included preparing students to be altar servers and coordinated pastoral visits to nursing homes and retirement residences. She also coordinated parish education programs which included Bible studies for adults. In 2013 as her health began to deteriorate she moved to the Motherhouse where she soon became a patient in the infirmary. After a long and difficult illness, she died peacefully on January 18, 2019.

Sister Yvonne had a deep devotion to the Eucharist, to the Blessed Virgin Mary and to the recitation of the Rosary. With her out-gong personality she reached out to support those in need.

The Mass of Christian Burial, held in the Chapel of Mary Mother of Compassion, Providence Motherhouse, Kingston, on January 24, 2019 was presided over by Most Rev. Brendan M. O’Brien, Archbishop of Kingston, assisted by members of the clergy. Rev. Richard Whalen was the homilist.