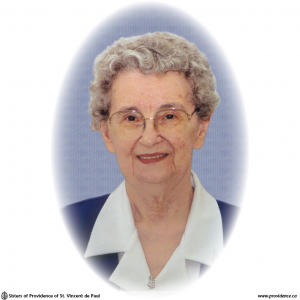 Elisabeth Fedorowych was born on October 27, 1918 in Gilbert Plains, Manitoba. She was the second oldest of nine children born to Nicholas Fedorowych and Mary Filipchuk. She and her siblings attended the public school in Sifton, Manitoba.

She met the Sisters of Providence in Winnipeg at the Providence Shelter and worked with the Sisters at St. Joseph’s Vocational School. She entered the postulancy of the Sisters of Providence of St. Vincent de Paul on March 5, 1940 much against the wishes of her parents. The hardest part for her was that she never saw her father alive again since he died in June 1945. She did attend his funeral and after that initial visit, her family became reconciled.

Following her First Profession of Vows at which time she took the name, Sister Mary Benilda, she was assigned to the House of Providence in Kingston to help in the kitchen. From there she was assigned to Rosary Hall in Toronto, and subsequently to Providence Hospital in Daysland, St. Joseph’s Vocational School, Winnipeg and finally to St. Joseph’s Auxiliary Hospital, Edmonton. While she was in Winnipeg and Edmonton, she took correspondence courses in purchasing through the University of Toronto Extension Department and Hospital Purchasing through the Catholic Hospital Association of St. Louis University. Sister did the purchasing for St. Joseph’s Hospital in Edmonton for 27 years. When she retired from purchasing in 1990, she completed a Pastoral Care course at the Grey Nuns Hospital in Edmonton and became involved with pastoral care at St. Joseph’s Auxiliary Hospital until she took up residence at the Motherhouse in Kingston in July 2009.

Sister was a compassionate, caring and deeply spiritual person and an effective member of the team at St. Joseph’s.  Her quiet gentle manner endeared her to the staff and patients alike.

The Mass of Christian Burial, held in the Chapel of Mary, Mother of Compassion, Providence Motherhouse on December 4, 2018 was presided over by Friar Edward Debono, OFM Conv., who also delivered the homily. Burial was at St. Mary’s Cemetery, Kingston.