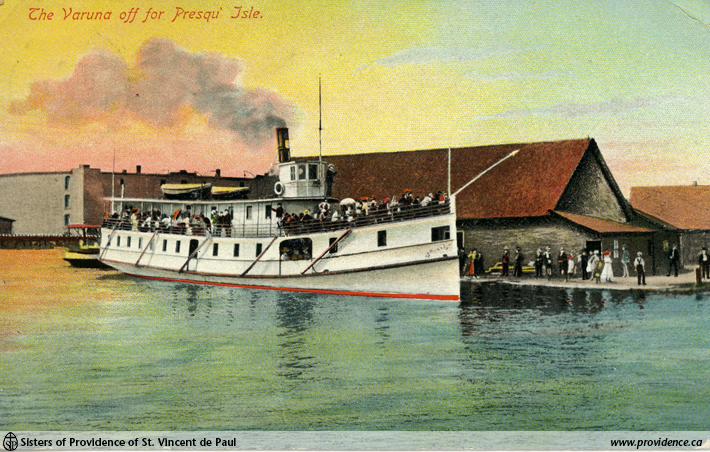 A vintage postcard of the Varuna, a passenger steamboat that plied the Bay of Quinte from 1880 to the 1920s.

A lovely summer excursion by two Sisters in Trenton to Lake on the Mountain near Picton, as described in the Annals of St. Peter’s Convent, Trenton:

August 29, 1906 – Upon a kind invitation extended by Miss L. Coleman to Sister Superior and Sister M. Stanislaus some weeks ago, the latter, accompanied by Sister M. Regina, (Sister Superior, being unable to avail herself of Miss Coleman’s hospitality) left at 7 am on the Steamer Varuna.

On arriving at Belleville, they were joined by eight of the Sisters from that little Mission, who were enroute to Glenora for a private picnic. The latter place was reached about 12:30pm when all the party disembarked.

After a rugged ascent to the top of the Mountain, to view the picturesque scenery of the Lake so strangely formed there, they repaired to a shady nook, when a choice luncheon was served. It was now one o’clock and needless to say ample justice was done to the many good things provided.

They were expected home about six o’clock, as the boat is due at that hour. Much anxiety was manifested by those at home, as the clock struck 7-, 8-, and there was yet no sign of them. It was feared some accident had befallen the boat, or they had been left at Glenora. Our anxious hearts were relieved when the Str. Varuna announced her presence at the dock by a “toot,” “toot”, shortly before nine o’clock.

Our two little Sisters were not long in reaching home, and both they and Miss Coleman expressed themselves as having thoroughly enjoyed their outing.