Excerpts from Congregational Annals of the Sisters of Providence of St. Vincent de Paul 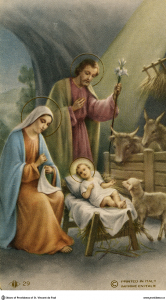 All in holy preparation for the great feast tomorrow. The chapel looks very sweet in its austere simplicity and pretty decoration of cut flowers. Two beautiful pedestals presented by Sister M. Carmelita, superior of St. Mary’s of the Lake, adorned the Sanctuary. Two jardinières to match are suitable to hold potted fern, placed on either side are an elaborate addition.

Mass at midnight by Rev. Father Brady. In the distance the choir was heard singing the sweet strains of Holy Night. Gradually the sound became more distinct and immediately at 12 p.m. High Mass commenced. The singing according to the liturgy of the church was most impressive and sweetly rendered by the Novices & Postulants under the direction of Sr. M. Canice. The celebrant Rev. Father Brady preached a sermon during the Mass, appropriate to the feast, which all appreciated & enjoyed.

At 6:30 a.m. the bell rang, but before the ringing of the morning bell all were awake to the singing of the song of the “angels” as the Sisters went through the house proclaiming in song the dawn of the Feast. The Morning Prayer followed by med. And lecture. Afterwards about 7:20 the Sisters had a light breakfast and then repaired to the chapel for Mass.

Our chaplain, Rev. Father Brady said his third Mass at the Penitentiary in Portsmouth. During the second Mass here the choir very sweetly rendered some Christmas carols. Unlike the old familiar hymn, one has to become accustomed to the new ones to distinguish any great difference.

After Mass the Sisters got their letters and parcels. In the Novitiate the Novices & Postulants had the same pleasure & were also in great glee. Dinner at 12 p.m. of turkey, etc. was most delicious & was surely enjoyed. His Excellency with Rev. Father Brady arrived about 5 p.m. After a short visit His Excellency gave Benediction and spoke from the Sanctuary very beautifully on the birth & Infancy of our Divine Lord; the lessons taught us of humility, esp. and poverty.

In his talks, always so interesting, His Excellency seems to bring in some topic of zeal to inspire his listeners to a greater effort for good. Such was the conclusion we arrived at after hearing him speak in the refectory and parlor after supper. Both the Archbishop and Father Brady honored the occasion by having supper with the Sisters in the refectory. The tables were very daintily arranged with linen, silver, glassware & cut flowers, etc., while the menu of fruit cocktail, olives, oyster patties, salad, roast turkey, cranberry sauce, roast stuffed potatoes, green peas, chiffon pie, etc., served by Sr. M. Domitille & Sr. M. Amable was all that could be desired.

After supper the Novices sang some Christmas carols & thus ended a very nice & enjoyable day. His Excellency wishes the sisters to have an extra sleep during the next few days, so it was arranged that Mass be later than the usual hour to accommodate the chaplain as well.

The teachers were all here during the afternoon except Sr. M. Francis Xavier who has a cold. They left about 7 p.m. Sr. M. Aurea and Sr. M. Celine were here and stayed all night.