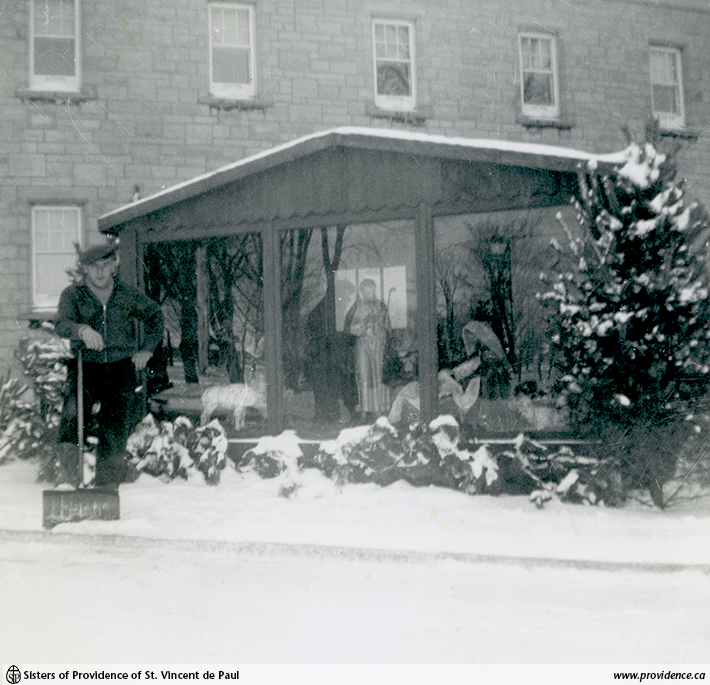 Joseph Vanderhelm, standing in front of the new Crib in January 1962. Photo courtesy of William Vanderhelm.

Every year at Christmas, we all enjoy the large outdoor Crib that is on display in front of Providence Motherhouse in Kingston. The Statues were purchased by Sr. Mary Roberta, General Treasurer, in 1961 and she requested that a stable be built to display the statues.

Joseph Vanderhelm who started working in the Maintenance Department at the Motherhouse in 1959, built the stable in time for its first use in December 1961. Joseph Vanderhelm, later became the Head of the Maintenance Department in the early 1970s – a position he held until his retirement in 1995. The Crib originally sat in front of the Motherhouse between the main entrance and the statue of St. Joseph. In later years it was moved to its present location, closer to the chapel.

References to the Crib in the Congregational Annals show that it has always been popular:

December 14, 1961 – A new outdoor crib is being erected in front, close to the shrine of St. Joseph. The beautiful statuary of the crib was purchased several months ago. One of the maintenance men set it up according to the directions submitted. It is all very lovely and greatly admired.

December 21, 1966  – The judges for the “Christmas Lighting Contest” sponsored by the Public Utilities Commission have awarded us first prize of $150 in the “Outdoor institution Class” This is the second consecutive year that our Christmas Crib has won top mention.

December 23, 1970 – More snow flurries this afternoon and the temperature very low. Many people coming along our driveway to see the outdoor decorations, especially the crib.

January 6, 1975 – The out-door crib was much admired by passers-by, cars frequently driving in from the highway to give occupants a close-up view.

December 17, 2009 – The lighted outdoor crib was enjoyed and visited by many people who drove in to see it.

According to the Congregational Annals on January 22, 1963 “Mr. Hawkins took a picture of our out-door crib this morning which is to be dismantled and stored away. The front of the crib – glass and frame had to be removed to get a good picture. But what a morning it is dark and grey with a heavy snow storm. It will be a surprise if the picture (which we hope to have printed on a Christmas card) turns out well.”