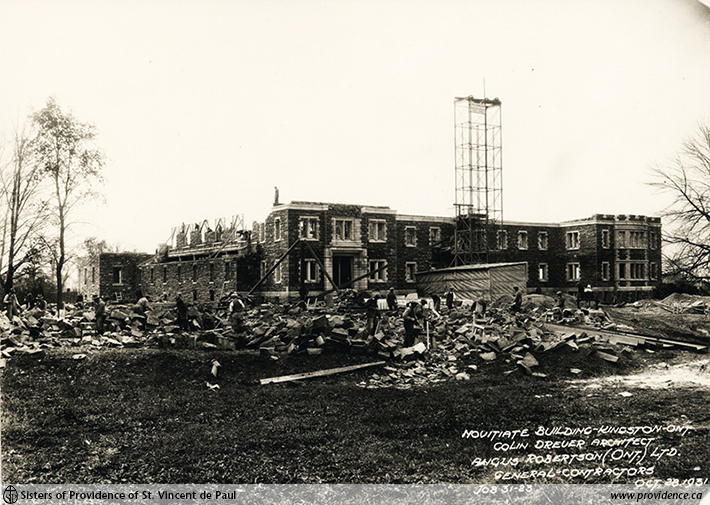 Construction of Providence Motherhouse, October 28, 1931. This photo was taken a month and a half after the cornerstone was laid.

The finding of the 1956 cornerstone at St. Mary’s of the Lake got the Archives staff thinking about cornerstones and time capsules. Archives technician Tom McCarthy found a mention in the Congregational Annals of a time capsule that was laid in the cornerstone of the original wing of Providence Motherhouse. This cornerstone was laid on September 13, 1931, when the building was under construction.

September 13, 1931
Laying of the corner stone of our new Novitiate at 3 p.m.
Our Mother General, the Assistants and a great number of the Sisters went out. The grounds were beautifully decorated. At 3 o’clock the procession was formed – the boys’ choir, the Sanctuary Boys, the clergy with His Excellency, the Archbishop. They proceeded to the building and mounting the platform, His Excellency blessed the corner stone and with the silver trowel, which was presented by the architect, Colin Drever. A sermon by Msgr. Nicholson, V.G. followed…

Placed in the stone was a Copper Box, containing the Local Papers, all the coins in present use, several Medals of Saints – of Jesus Our King, of Our Blessed Lady under different titles – also a record of the time…

On this thirteenth day of September nineteen hundred and thirty-one, His Holiness Pius XI being the reigning Pontiff and George V by the grace of God King of the British Dominion. His Excellency, the Right Honourable Bessborough, Governor General of Canada; Honourable William Donald Ross Lieutenant Governor of Ontario; His Worship George Clark Wright, Mayor of Kingston; the Most Rev. M. J. Spratt, Archbishop of Kingston; and Rev. Mother Sr. M. Ursula, Superior General of the Sisters of Charity, Kingston, His Excellency M. J. O’Brien D.D. Coadjutor Archbishop of Kingston in the presence of a large assembly of the clergy of the diocese and the citizens of Kingston and surrounding district, laid the corner stone of this edifice destined to be a Novitiate for the training of subjects for the order above named. After an address by His Excellency, Most Rev. Archbishop O’Brien the Vicar General, Rt. Rev. Msgr. J. F. Nicholson, delivered a sermon appropriate to the occasion.