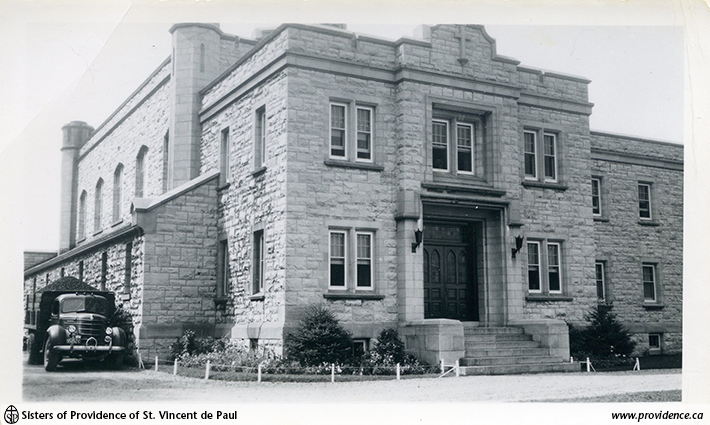 Coal truck delivering coal to Providence Motherhouse in ca.1943. (If you don’t recognize this view of the front door, it’s because we are used to seeing the Administration wing to the east of the main entrance, but it wasn’t built until 1964.)

As the weather gets colder, we all appreciate when the heat is turned on at the Motherhouse. Have you ever thought about how Providence Motherhouse was originally heated? From its opening in 1932 until 1958, the building was heated by coal. A coal bin was located underneath the original chapel, now the auditorium. A coal truck would make regular visits to the exterior of the chapel (pictured) and deliver coal into two coal hoppers which would pour the coal directly into the coal bin. The old coal bin was converted into the current trunk room in 1959.

According to the congregational annals:

June 26, 1958 – The new boilers are being installed in the furnace room. Henceforth we will be using oil instead of coal for heating all the building and the orphanage.

February 14, 1959 – A new trunk room will now replace the coal bin which is at present undergoing a complete transformation, masons, carpenters and painters are leaving their mark on the job. The furnace room too is having its face lifted and looks real nice.