Movies at the Motherhouse

The Congregational Annals document the major events in the congregation’s history, but they also document smaller happenings in the Sisters’ lives, including what movies the sisters watched. Here are some excerpts from the Annals:

September 9, 1952 – Two nice pictures have been shown to the sisters here during the month, namely: “Angels in the Outfield” and “The Song of Bernadette”

June 7, 1962 – Sr. Mary Roberta’s feast was observed in real holiday style. All meals were substantial and delicious, with supper in the grove, ice cream, etc. An added treat for all was a movie “The Parent Trap” staring Hayley Mills, which was delightful and greatly enjoyed.

September 22, 1962 – Mother M. Lenore’s feast (August 8) which was postponed, on account of our retreats, was held today. We enjoyed the conge immensely with its so many advantages, and a very lovely movie “The King and I”, to complete the day. A second movie the next evening, showing the work of the F.B.I., was most enlightening on the fine accomplishments of the organization.

October 29, 1964 – A second Mass was offered yesterday and today by Fr. R. Albert of Norwalk, Conn. Father Bob (as he is known to us), in addition to offering Mass for the sisters intentions, has made arrangements for our entertainment on Halloween night, the suspense movie, “Moon Spinners”. He and his mother are visiting their cousin, Sr. M. Scholastica.

There are too many movies to mention them all, but here are some of the other movies mentioned in the Annals: Roman Holiday, PT 109, The Reluctant Saint, An Affair to Remember, and A Man for All
Seasons. 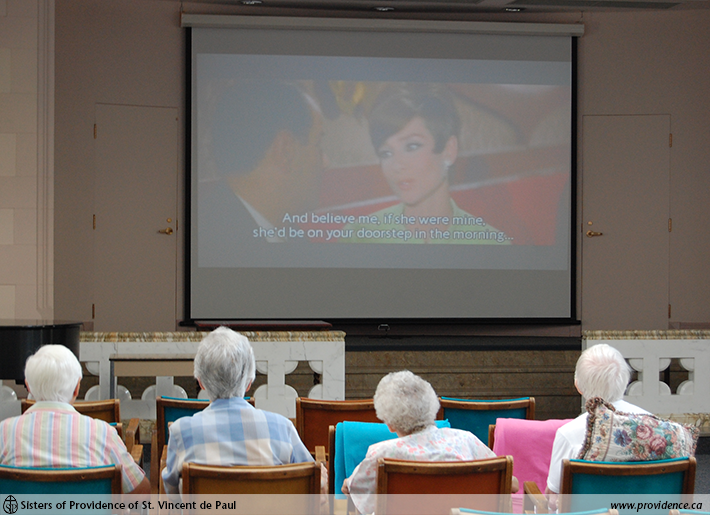