Opening the doors, 50 years ago

Opening the doors, 50 years ago

The open house at the Motherhouse this October got me wondering about past open houses and I discovered that a series of three was held in November 1964. They were held to show off the newly-completed large addition to the Motherhouse consisting of the administration wing, the extension of the Marian wing, the extension of the novitiate (where the Spirituality Centre is now), the new dining, kitchen, laundry facilities and a new heating system. 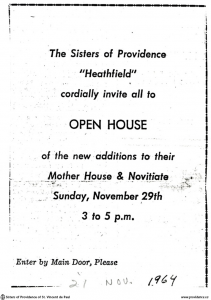 On Saturday, November 28, 1964 an open house was held for Sisters, including those who lived in other towns and Sisters from other congregations in Kingston.

Heathfield was the scene of animated activity on this the first day of a series of open houses. Today was reserved for the Sisters. At 2 p.m. chartered buses of private cars brought our Sisters from Belleville, Trenton, Tweed, Picton, Gananoque, Brockville, Perth, Smiths Falls, Batawa, and Chesterville; representatives came by train from Toronto, Montreal and Arnprior.
Our good Friend Mr. O’Shea whose school buses we engage when groups of sisters travel in the city or nearby towns, kindly transported, free of charge, our Sisters from the House of Providence and St. Mary’s of the Lake and the Sisters of Notre Dame Convent and Hotel Dieu. The sisters from St. Joseph’s Provincial House Amherstview (Religious Hospitallers) and the Sisters of St. Martha from their two convents at Regiopolis College and Kingston Mills brought the total number of visitors to 200.

A guided tour through the whole house occupied the time from 3-5. Then in our lovely but over-crowded chapel Fr. Lynett offered Mass when our Sister-Communities, along with members of our own congregation, in the true spirit of ecumenism gave thanks to God for the successful completion of our building programme and asked the grace that the new facilities may serve for the spread of His Kingdom.

At 6 p.m. we descended to the refectory for a turkey dinner. For the first time our new cafeteria tables and chairs were used. After supper the Sisters whose feet could take the strain assembled in the novices’ recreation room for dancing, while the rest visited around the front of the house until the buses arrived for the homeward journey.

It was indeed a joy to welcome so many of our Sisters for the Saturday “Open House” arranged especially for them. During this happy reunion our thoughts turned repeatedly to our dear Sisters in the Western Provinces, who were prevented by distance from being with us, and to all the Sisters whose duty kept them at home. Those present and those absent were all united in the strong bonds of love, of a shared ideal, and of gratitude for the fulfilment of a long cherished hope. Many
Sisters from the Congregation de Notre Dame, the Hotel Dieu, and the Sisters of Martha joined in our festivities. After the tours the Sisters filled the chapel to overflowing to participate in a Dialogue Mass, offered by Father Lynett. It was a stirring experience to hear so many voices in strong fervent tones saying the prayers and giving the responses. It strengthened our realization of what a fine thing it is to be a part of the Mystical Body of Christ. Following Mass, three hundred Sisters enjoyed a delicious dinner of turkey and all kinds of good things. A little time was left for dancing in the Novices’ new recreation hall before the buses arrived at eight o’clock. Our reunion ended all too soon!

The Sisters left expressing their enjoyment of the day and their pride in their new Mother House. The comments of the Sisters might be summed up in the remarks of one of the Sisters of Notre Dame: “It is beautiful, dignified, artistic; everything about it is good, yet it all marked with the stamp of simplicity.” This is exactly the way we wanted it. 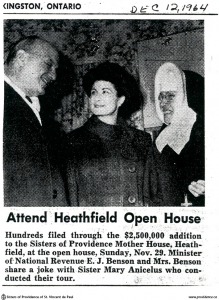 Bring in the crowds: the public’s turn

The second day of the series was “Open House” for the public. The policeman who directed traffic on the grounds estimated that at least one thousand persons entered. Everywhere, in the chapel, in corridors, and in all the larger rooms were baskets of beautiful flowers – mums, carnations and roses – the gifts of religious houses (our own both East and West, and those of Sister-congregations) and of professional and businessmen of the city.

After the guests had toured the building, they were conducted to the Sisters’ refectory. The freshly painted green walls gave a soft background for the coral chairs and three tea tables with our best linens and the heirloom silver service – (Mother Edward’s silver jubilee gifts) made a lovely scene. But the guests after the tour needed more than a beautiful picture, and they thoroughly enjoyed the refreshments of which there was an abundance. Our two city houses, the House of Providence and St. Mary’s of the Lake Hospital, had brought quantities of fancy sandwiches and cookies.

Our kitchen Sisters added others along with the tea and coffee, and the Ladies Auxiliaries of the Providence and the Lake served. The Sisters of the Mother House are most grateful to these ladies who gave so generously of their time (they were here from 2 – 6 p.m.) and proved such gracious
hostesses in the dining room.

Sunday brought a thousand or more visitors to our “Open House” for the public. Many of the Sisters’ relatives were among them, and also large numbers of non-Catholics. One of them was even looking for the dungeons!

All were pleased with the tours, and also with the dainty and delicious refreshments served to them by the Auxiliaries of the House of Providence and St. Mary’s of the Lake. Our Sisters in both these houses provided most generous supplies of sandwiches and cookies. We thought we would never reach the end of them, but the great influx of visitors sent Sisters scurrying to the kitchen to make up another dozen loaves of sandwiches. We were all rather weary by nightfall, but happy and grateful that all had gone so well.

Last but not least, the clergy

On Tuesday, December 1, 1964 the Motherhouse hosted a dinner and tour for the Archbishop and clergy of the Diocese.

Today came the climax in our “Open House Series”. The clergy of the diocese, under the genial leadership of the Vicar General Msgr. Lacey, each year tender His Grace the Archbishop a dinner to welcome him home from the sessions of the Vatican Council. The priests prefer to come here rather than go to a hotel, as they feel more at ease and at home here (and by the way, get a better meal). This year we combined the welcome dinner with the blessing of the new building.

After dinner, His Grace gave a succinct clear summary of the third session of the Council, emphasizing the Holy Father’s warning against imprudent and extravagant innovations. Then he made a tour of and blessed the new wings, and with his usual fatherly solicitude visited every sick Sister in the infirmary.

Monday we had a breathing space and an opportunity to do some re-polishing for the next event. About eleven o’clock on Tuesday the Priests began arriving for the “Welcome Home Dinner” in honour of His Grace. The refectory looked particularly beautiful with the new tables, the coral chairs, and the dainty matching floral bouquets. Seventy-four Priests were here, and they did justice to a fine steak dinner. […]

Immediately following the dinner, His Grace blessed the new additions, with the exception of the Novitiate wing, which had been blessed at the time of the laying of the corner stone. The Priests also had the opportunity of touring the building. His Grace and all the Priests were most favourably impressed.