Prayers for Peace During World Wars

As this month of remembrance closes, let’s look back through the congregational annals of the Sisters of Providence of St. Vincent de Paul and acknowledge the congregation’s many prayers for peace during both World Wars. 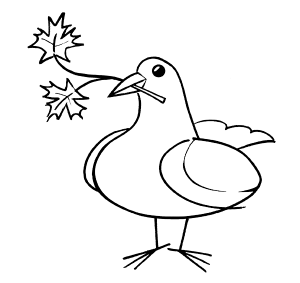 March 21, 1915 – The day of Public Reparation to God, in atonement for sin ordered by His Holiness Pope Benedict to be observed throughout America…The object of devotion is that God in His Mercy hear the prayers of His people and send peace to the earth now so cruelly ravished by the horrors of war.

October 1, 1915 – Opening of the Month of the Holy Rosary….May God grant through the intercession of His Blessed Mother that Holy peace may be established in this world, now so rent by the disorders of war.

April 23, 1918 – Mass, Pontifical was celebrated at the Cathedral for our Soldiers who have fallen in battle, especially those of our Diocese. Mass this morning, at which all the children received Holy Communion, was offered for “Peace and victory.” May Almighty God hear the prayers of the children.

August 25, 1939 – A special Mass for peace was offered this morning by our Rev. Chaplain who announced the intention, asking all to unite in supplicating divine aid, according to the Holy Father’s intention for peace and that war might be averted.

September 3, 1939 – Today, despite of all hopes to the contrary, war was declared by Great Britain. This action was taken because of Germany’s march on Poland. The Professed Sisters are making retreat today. Many prayers and sacrifices will be offered anew for peace.

1939, October 8 – Exposition of the Blessed Sacrament all day for peace, on account of present unsettled war conditions, which closed with Benediction and the usual October devotions.

June 22, 1940 – The black fast prescribed as a petition for peace, was kept today, the Sisters all being present.

September 6, 1940 – First Friday – exposition all day. The perpetual Novena to our Sorrowful Mother was held and closed with Benediction. This was the ninth in the series and was principally offered for peace.

September 8, 1940 – This is a special day for prayer for peace – ordered by the government. We had as a result the privilege of exposition all day and an opportunity of many extra prayers.

November 24, 1940 – This is a day of public prayer all over the world, ordered by our Holy Father the Pope for peace. The Holy Father’s intentions to be included in prayers are: 1) to pray for those who died in this war; 2) for persons suffering because of this war; 3) and for peace founded upon justice and charity.