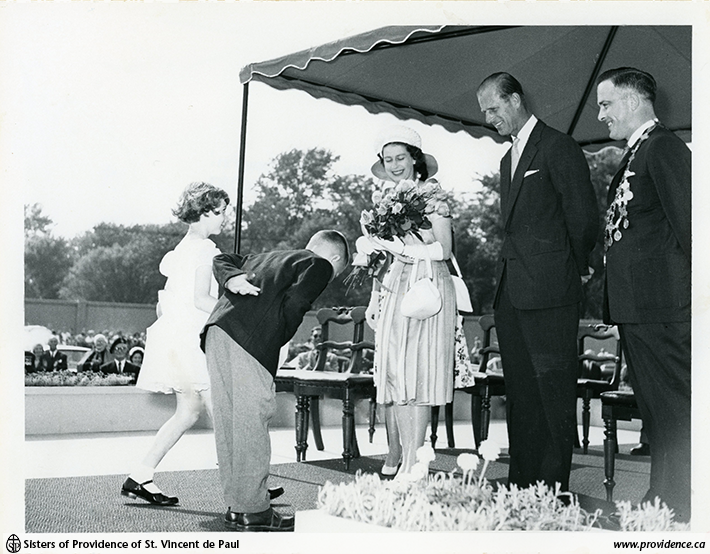 Queen Elizabeth II receives flowers from seven-year-olds Debbie of Sunnyside Children’s Centre and Neil of Heathfield Orphanage (operated by the Sisters of Providence of St. Vincent de Paul) on June 28, 1959 at Richardson Stadium, Kingston ON. Prince Philip Duke of Edinburgh and Kingston Mayor William T. Mills look on. Photograph originally published on the cover of the Kingston Whig-Standard, June 29, 1959.

Upon the passing of Her Majesty Queen Elizabeth II, we take this time to reflect back on memories of her Royal Visit to Canada in 1959 as experienced by the Sisters of Providence of St. Vincent de Paul. Queen Elizabeth II and Prince Philip visited Montreal on June 25th and Kingston on June 28th as part of their Canadian Royal Tour in 1959. As part of their tour in Kingston they drove through the ground of St. Mary’s of the Lake and drove past the House of Providence (Providence Manor).

Two Sisters of Providence of St. Vincent de Paul attended the Civic Dinner and Ball held at the Queen Elizabeth Hotel in Montreal on June 25, 1959 with Queen Elizabeth II and Prince Philip and were mentioned in the June 26, 1959 issue of the Montreal Star:

“Women guests wore their most attractive gowns, their finest jewelry and little furs. But two women guests wore a type of dress that set them apart from all the others. Sr. Mary Melanie, administrator of St. Mary’s Hospital and Sr. Mary Felicitas director of the school of nursing, who had dinner with the Queen last night, were in the habit of the Sisters of Providence of St. Vincent de Paul. “Wasn’t it wonderful we were all able to come,” Sr. Mary Melanie said. “it’s a great privilege but then the Queen doesn’t come every day.”

The visit to St. Mary’s of the Lake Hospital is recorded in the Congregational Annals of the Sisters of Providence of St. Vincent de Paul:

June 28, 1959 – Every Sister who felt able for the outing to go to St. Mary’s of the Lake, was permitted to do so this afternoon, so they would be able to see the Queen. Her Majesty Queen Elizabeth and His Royal Highness Prince Philip drove around the grounds in front of the hospital where the patients were nicely arranged in wheel chairs, so they had a good view of the queen and party as they passed by. It was a privilege to be this honoured and a nice gesture on the part of the officials in charge. Mother Mary Electa and Mother Mary Alban accepted a special invitation to Fort Henry where a delightful program was presented for the entertainment of the Royal Party and assembled guests. At St. Mary’s of the Lake a most delicious lunch was in readiness for the Sisters. Cold drinks etc. which was most refreshing and enjoyed immensely especially as the afternoon was extremely warm.