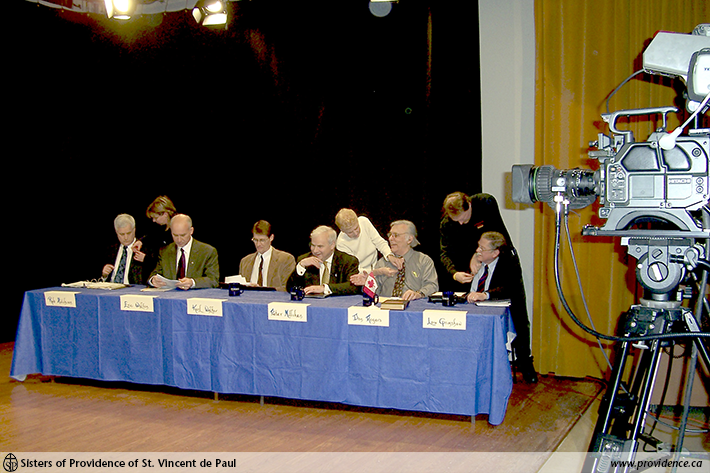 In light of the recent federal election, let’s take a look at the Sisters of Providence’s history of voting in federal elections. After obtaining suffrage in 1919, the first Canadian federal election in which women could exercise their right to vote was 1921. The congregation was unsure at first whether to let the Sisters exercise their right, and in the early years the Council considered the issue every election, but by the 1930s the Sisters’ right to vote had become the norm and part of a long history of voting and political interest, as recorded in the Congregational Annals:

December 6, 1921 – Dominion election. We all had the privilege of voting. We asked His Grace yesterday his will in the matter. He left us free, so it was decided was we would not vote, but this afternoon Fr. Hyland, Rev. Dr. Casey and M Grace – Dr. Casey pressed very hard saying it was our duty to vote. Finally our Mother assembled the Council and it was decided to avail ourselves of our privilege. It did not take long, the whole Community were out and back in a very few minutes.

October 29, 1925 – Dominion elections. The Sisters are pressed to vote. Several men went to the Archbishop. He replied that he had no jurisdiction in regard to the Sisters voting. Dr. Gibson then searched for our Mother General. He found her in Montreal. She replied that she would be satisfied to allow the Sisters to vote if the Council were willing. The Council held a meeting just then but did not favour it. So the matter was dropped.

June 19, 1934 – Today all the Sisters went to Cataraqui to vote. Great rejoicing over the result of election. Liberal government are in the majority.

March 26, 1940 – The laundry is a busy place today. As there has been no wash since before the retreat there was extra work on hand. Then to make matters more interesting the Sisters were called upon to vote for the Dominion elections and for this purpose drove in the bus to Cataraqui.

June 10, 1957 – All the Sisters who were able went to the polls today to cast their vote. The Liberals lost and Conservatives gained, but not enough for a working government in the majority.

June 25, 1968 – Election Day. All the Sisters who could get into a car went out to vote. Many remained up late to watch results on TV. A landslide for the Liberals under Mr. Pierre Trudeau.

February 11, 1980 – Senior Sisters who do not feel able to go out to vote in the Federal Election next Monday will vote by proxy this time. Sisters are concerned over the election and anxious to have every vote count.