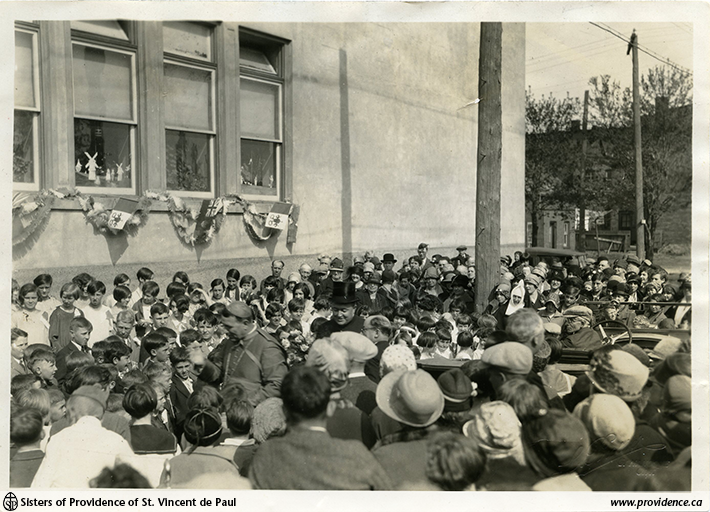 We came across this photograph from St. John’s School, Gananoque in the Archives. It didn’t have a date, or a good explanation of what is going on in the photograph. Based on the clothes and the cars, it might be the 1920s, and the dignitary is clearly a high ranking church official. Let’s look at a few different sources for clues…

According to Sr. Mary Faustina in her history of St. John the Evangelist Parish, Gananoque – “During his stay in Gananoque Father Hanley and the parishioners had the rare privilege of having the Apostolic Delegate for a guest. Father’s capable sister, Min, prepared a sumptuous meal for the occasion which many of the parishioners still recall with genuine admiration for her knowledge and skill.” So we definitely know that the Apostolic Delegate visited Gananoque, but we don’t know in what year. Sr. Mary Faustina does tell us that Father Hanley was the pastor of St. John the Evangelist from 1924 to 1931, so that narrows it down a bit.

Sr. Mary Faustina mentions in a different part of the history – “When [Mary Frances Keyes] was in Grade One she was chosen to present a bouquet of roses to the Apostolic Delegate “because,” she laughingly explained, “I was the only one who had long hair.” Again, no year is mentioned, but according to another story by Sr. Mary Faustina, Mary Frances passed her Grade 8 exams with top marks in 1933 – this would put her in Grade 1 in 1926.

According to the Congregational Annals, the Apostolic Delegate visited Kingston on May 22, 1926 – “His Excellency, Msgr. Peter de Maria, Apostolic Delegate arrives in the City at 4 p.m. Great preparations have been made for his reception. He comes by C.P.R. in private car.” It seems likely that he visited Gananoque on his way to or from Kingston.

According to all these clues it seems most likely that this photograph documents Most Rev. Pietro di Maria, the Apostolic Delegate to Canada, visiting St. John’s School in Gananoque in May 1926.