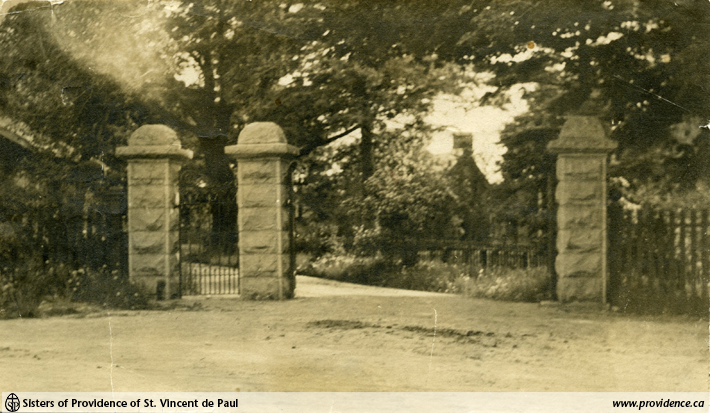 This photograph shows the entrance to Heathfield property in the early 1900s, which is now the home of Providence Motherhouse. The gatehouse (visible on the left) was demolished in October 1968 when the driveway was widened to accommodate the new chapel. Today there are only two of the original gateposts left and they are slightly shorter than they appear in this photograph.

Over the years the gatehouse served many purposes, as recorded in the Congregational Annals.

It served as a residence for maintenance men…

1933, April 3 – Our men have been sleeping in the basement during the winter, they moved over to
the cottage today.

1943, February 12 – During the month we had installed a new stove in the kitchen, an Aga which although expensive, is supposed to be a great coal saver. A further advantage, there will be no need now of anyone starting a fire in the early morning as hitherto, when one of the men (which was not satisfactory) had to come from the cottage very early.

And construction headquarters while they were building the chapel…

1967, December 5 – What an honour for the old ”Lodge” which has served so many purposes for a
quarter of a century, to provide as its last service, headquarters for the builders of a chapel!

1968, October 30 – A landmark disappeared from Heathfield and Kingston this morning when the builder’s bulldozer razed the cottage (gate-house) which has guarded the entrance to Heathfield property for over one hundred years. Since the beginning of the building operations the contractors have used the cottage as their office, but now as work nears completion the driveways are being widened and the cottage had to go.