The Novice in the Sewing Room

Muriel Black entered the Sisters of Providence as a postulant in August 1950 and received the Habit in March 1951. Sister Black made first profession in August 1952 taking the religious name Sister Stella Maris. As a novice, Sister Black, as she was known in the novitiate, wrote several humorous articles for the Guardian magazine about life as a novice. The Guardian was a children’s magazine published monthly by the Sisters of Providence from 1916 until 1959.

The following article describes Sr. Black’s experience learning to sew and was published in the October 1951 issue of the Guardian magazine.

There are some fallacies we meet with every day which have been so easily accepted by the world at large that they have almost acquired the status of first principles. One of these, to my mind, is the idea that all SISTERS are naturally talented seamstresses. It’s not difficult to see how such an idea evolved. You admire the vestments in the parish church, or the hand-worked altar cloth in a friend’s home, and your companion, who is “in the know” remarks, “Yes, it’s lovely isn’t it? It was made by the nuns, of course. They always turn out such beautiful work.”

And so they do — those whose fingers are naturally skillful, and who have been trained to the work. But there is another side to the picture. Let me tell you what happened to me:

Several days after I entered the novitiate we met in the postulate for our first sewing class. All were equipped with woven-work baskets of ample size which Our Mistress had provided. (My own little case, on pigmy scale, containing minute sections for pins, thread, etc. reposed in my trunk, having been dubbed pretty useless. I was soon to understand the reason). The class opened with a prayer, (the reason for that too would soon become apparent), and we began. “Here we go”, I thought, no doubt remembering those table cloths, “I’ll soon be an expert.”

“First,” began Our Mistress, “thread your needles.” Then, with a glance at me, “Sister, use only one thread – – about half that length, or you’ll be putting some one’s eye out.”

With that she gave us some hemming to do with a warning to keep stitches even, and fairly small.

A few moments later she began to check. All went well until she came to me.

“Sister, you’re going backwards! Your needle should always point over your left shoulder, you know. You look as if you are trying to stab some body. And look at the size of your knot! A good seamstress never needs a knot.”

I was tempted to reply that did not apply to me, for I was not a good seamstress. Somehow I failed to receive the gift of dexterity of finger along with the postulant’s dress. However, I merely and (meekly) ripped out the hem and began again.

Then came the worst blow yet.

“Where is your thimble Sister?”

I started to explain that I had never used one in my life, but the words died in my throat as she produced a thimble from nowhere.

“Here, I think this should fit you. Put it on.”

I did. The thread, minus the knot, came flying loose of the material, and as my hand jerked back, the ill-fated thimble went sailing across the room. It took me several minutes to recover it, and regain my place, and by this time my poise was gone for good. Our Mistress, however, was patiently waiting for me.

“Come along now, Sister, the others are nearly finished.”

But I, it seemed, was not to get well started. A few minutes later I must begin again, as the hem was getting wider with every stitch. And so I spent the morning sewing, ripping, and chasing that recalcitrant thimble around the room.

Since then, the art of the fine seam had been gradually unfolding to me, and somehow with the aid of my companions, I completed the articles required for Reception Day. Nevertheless, I merely smiled politely recently when I heard it said that a visiting priest mentioned his desire to
have the novices embroider a set of altar linens for him – – because “they always do such beautiful work you know.” 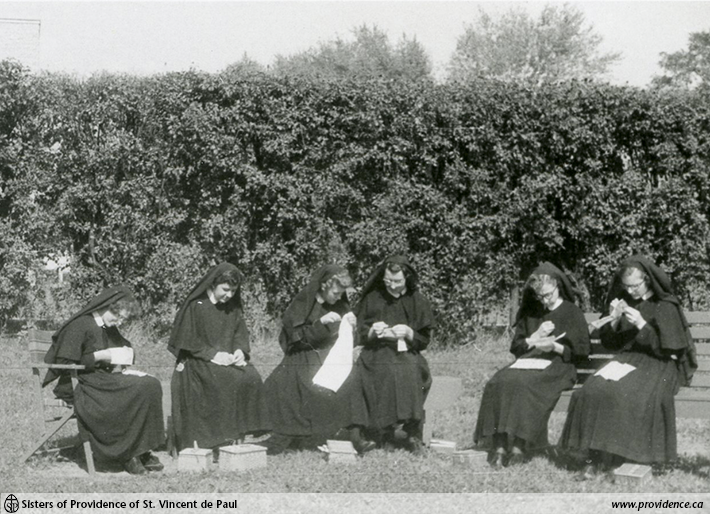