After 20 years, the vigil will end on September 17 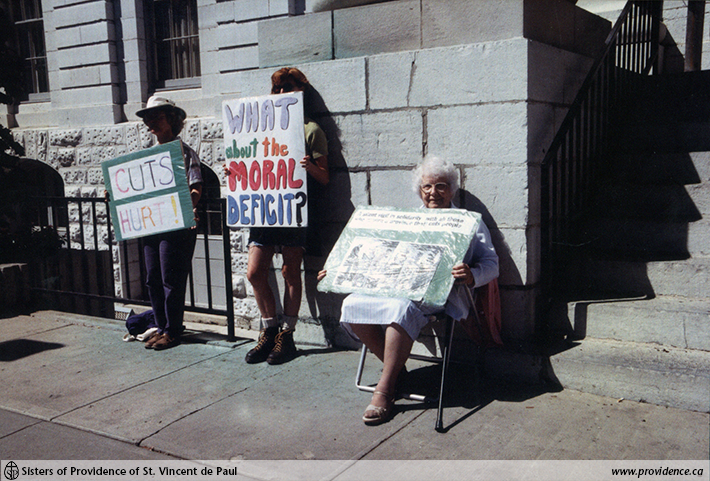 Vigil from around 2001 with the since-deceased Sr. Mary Hamilton sitting down on the job.

And let us not grow weary of doing good, for in due season we will reap, if we do not give up. Galatians 6:9

“We’ve stood in all kinds of weather. Rain and snow. Hot sun and extreme cold,” says Sister Shirley Morris SP, explaining the faithful consistency of the people who’ve kept the weekly silent vigil for justice since 1995. “Our common purpose and shared values mean that we’ve always stood in Hope. And it’s only through compassion and justice that hope will be restored.”

One time, back in the vigil’s early days, Sister Mary Hamilton was sitting in her lawn chair in front of City Hall, holding a sign that said something about peace.

“Get a job!” hollered a man from a passing car. The leather lung offered a rude gesture to the line of older women standing beside Sister Mary.

She just smiled serenely, saying to herself – and perhaps those of us within earshot – “I have a job. But lots of people don’t.”

Fast forward to 2015. The vigil keepers are still standing. The current version of the little handout that we’ve passed out to uncountable thousands of passersby still recalls the little story of Sister Mary. It adds: “If you work full time, all year round, and earn Ontario’s $11.00 per hour minimum wage, you’re still below the official poverty line.”

Our signs carry a variety of messages: Poverty never takes a holiday; Know justice, know peace; Sister Peggy Flanagan’s favourite – Poverty is Political; There is no Planet B; No war; Make Poverty History. One sign that’s kept reappearing displays the word GREED with a red slash through it.

This summer will be the last in which visitors climbing down from their tour buses at City Hall will be able photograph the little band of stalwart vigil keepers on the Ontario Street sidewalk. People from Taiwan to Mexico, Australia to Sweden have taken pictures of us…and our signs.

We’ve been standing for the equivalent of 21 days. And we’ve decided to put away our signs for the last time. September 17 will be our final vigil.

“Mark your calendars,” as they say. “Save the date.”

We want to celebrate this milestone by inviting people in Kingston and beyond to stand with us for a final vigil. We’ll celebrate with song and stories, food and drink. Our last vigil takes place as a federal election campaign gets underway. So we’ll be making some new signs just for the occasion: “Vote to End Poverty.”

As St. Paul says, “faith is the assurance of things hoped for, the conviction of things not seen.” (Hebrews 11: 1-40) After September 17, we’ll still be part of the same struggle, standing up for a fairer, greener world.