In Silence, Wisdom is born 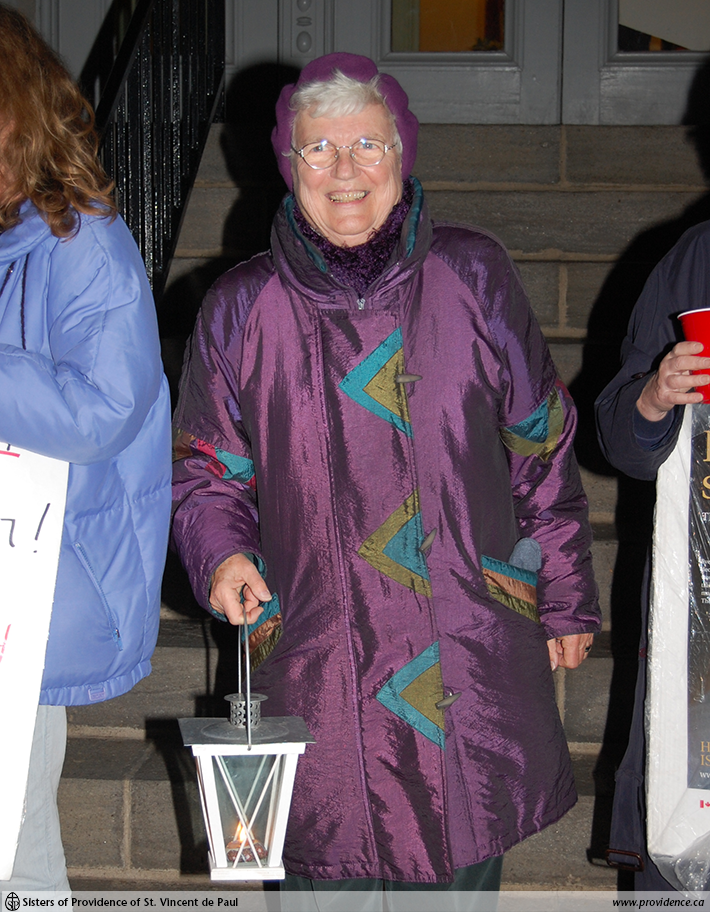 General Superior Sr. Pauline Lally at the 13th Anniversary of the Silent Vigil.

Twelve years ago when I returned to Kingston, after a two year stint out of the country, I soon discovered that I had come back to a very different Ontario. I remember one of my friends telling me at the time, “You won’t recognize the province, Pauline,” and he was right.

There had been a deficit and a debt and yes, these needed to be attended to. But why did they have to begin on the backs of the poor, with a 21.6% cut to social assistance?

The premier of the province, I understand, at the time visited our limestone city and was met with a great deal of opposition because of this. Some of our Sisters attended that protest but it was not their “cup of tea,” so to speak. Moral outrage is a wonderful motivation but it is no solution for the problem.

Yet, we wanted to make a point too. We chose the public space in front of City Hall one Friday noon hour in November of 1995 mourning governments that put profit before people. Mourning is a legitimate response to such an action. Those cuts haven’t gone away and neither have we, as you notice.

Ghandi says, “No matter how insignificant or small, we must be the change we wish to see in the world.” Well, what could be more insignificant or small than our little Friday noon hour vigil where we keep before ourselves and the public the plight of the poor? Awareness is always the first step.

Some have said the Vigil is a strong and significant symbol in Kingston. Others have said that it is silly and worthless – an embarrassment to the City with tourists in the summer, but that is not what all the tourists say. Many say, “We have the same problems in our country too.”

It is a global problem — cutting taxes to the wealthy and social programmes to the poor. You’d think the greedy were needy and the needy, greedy.

Just before I left, Sister Inez, one of our 90 year young sisters handed me a quote from Oscar Romero who was martyred in El Salvador for his justice work for the poor, “The way you look at the poor is the way you look at God.” A rather powerful statement!

Many of you have joined us and stayed with us all these years and I thank you.

We have developed our own little community of solidarity and dangerous as this is, I would like to mention a few: one of course is Sr. Shirley Morris who was the director of the Justice and Peace Office at that time and who started this vigil.

As well, Sr. Peggy Flanagan who has been a staunch supporter, a valiant writer of Letters to the Editor on behalf of the poor and peace, (either in her own name or her mother’s). Sister Una was there that first day they came down here, (My, they must have been brave!), and she is with us today after spending many years in the north with the Aboriginal people.

Also I am thinking of those others who have gone before us, our deceased Vigil keepers, Rev. Bob Bater’s father-in-law was the first. He made us a wonderful banner for our Anniversary. Then there were the two fine faithful labour fellows; Howard Dorey and Oliver Doyle. You could always count on them to help us out. Our former supportive General Superiors, Sisters Irene Forrester, Joan Whittingham and Kathryn LaFleur always came to our anniversaries.

And then there was the media darling Sister Mary Hamilton. She was a great support to me when I came to work in the Justice and Peace Office. She was in her 80’s and when we’d drive back together she’d say, “You know I almost didn’t come today with my old bones but I’m glad I did.” I don’t know if it was the fresh air or what but I, too, would feel the same. I always feel better after the vigil.

I remember one person saying, “I can’t do much but I can do this.” Another said, “I don’t go to Church now. Somehow standing silently in this fashion is my Church practice.” I think it is the solidarity in silence among the Vigil keepers.

I would like to say a few words on why it is a silent vigil. It is a silent vigil because we wanted our witness and language to be non-violent. Former Councilor, Beth Pater once said, “I’ve been to many noisy demonstrations and marches but this simple vigil is profound in its silence.”

You know in silence, wisdom and insight are born. A mindfulness which comes out of the silence helps us to be fully present in the here and now, being in touch with what is going on within us and outside us as we look across the basin.

In silence we touch our bottom line, which is a consideration of all the effects that we have on one another and the planet. It has an active energy and it gives our lives energy and purpose.

In the silence, a community of solidarity is formed by the vigil keepers. It helps us look deeply to see pain and suffering in the world. As we stand we see, beyond that beautiful basin as the ferry goes by, the Royal Military College. Is this a place where our young men and women train for peace or train for war? We need to recognize our deep desires for peace and its true power must be cultivated.

We really are a country at war. We are at war in Afghanistan, there is a war in Iraq and God knows in how many other countries. But in this country there is also a war and wars are always, in the end, stupid. The war in this country and around the world are the wars on the poor and the war on the environment. Tomas Martin says “War is a coward’s escape for the problems of peace.”

Those involved in active social protest need time for silence and solitude and inner quiet. This is a necessity, not a luxury. Contemplation must precede our actions; otherwise, they are empty.

In our little handout we have a quote from St. Augustine that says “Hope has two daughters – anger and courage.” Hope criticizes what is, hopelessness rationalizes it. Hope resists what is; whereas, hopelessness adapts.

Let’s not adapt to what is unjust. Let us continue to stand in a genuine firm hope, that goodness will prevail through our attitudes, our actions, our prayer and silent solidarity, our networking and advocacy with others who work for justice through faith in the mystery of life that makes us all one.