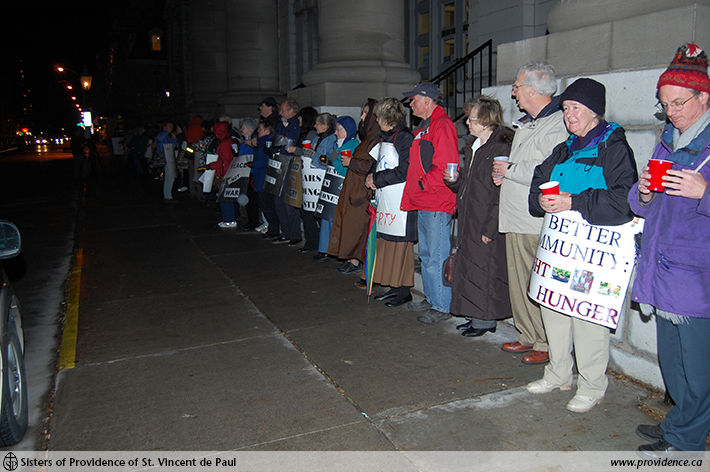 “The last thing poverty respects is age. Young, old or in between, being poor erases smiles from our faces.”
— quote posted on a sign at the 13th anniversary of the Silent Vigil

The Ontario government releases its long awaited poverty reduction strategy within weeks and the Sisters of Providence have played a role in forcing the government to take action.

For 13 years, the Sisters have joined with other vigil-keepers in silent protest against government social cuts. Close to 100 people attended a reception on November 13th, to mark the anniversary of the silent vigil first organized by the Sisters, and grown to include many other vigil-keepers. It was held in an appropriate setting — Kingston City Hall, the seat of Canada’s first government and the site of the weekly silent vigils.

Alice Gazeley, co-chair of the Kingston Roundtable on Poverty Reduction, applauded the vigil keepers for becoming living reminders of poverty in our midst.

“The vigil-keepers possess two key qualities in order to perservere each week — compassion and passion.”

Guest speaker Armine Yalnizyan, economist and first recipient of the Atkinson Foundation Award for Economic Justice, discussed the widening gap between the haves and have-nots.

“Ontario has the largest rate in the country when it comes to inequality. Governments have to act but it can’t be at the municipal level. We’re at a brand new moment in our history, if we stabilize and strengthen our economy, it will help alleviate poverty,” says Armine.

Director of the Justice & Peace Office of the Sisters of Providence Jamie Swift began his greeting by bouncing a toy YO-YO to illustrate his message.

“We’ve stood outside this building for 13 years that have been dominated by YO-YO thinking. It’s all about this little toy. In this case, the meaning of YO-YO is You’re On Your Own. YO-YO thinking is a cut-taxes-and-get-government-out-of-the-way-mentality. YO-YO thinking is about rampant individualism. Neglecting the common good.”

Sisters of Providence General Superior Pauline Lally spoke about the importance of silence during the weekly vigils.

“Wisdom and insight are born in silence calling us to action.”