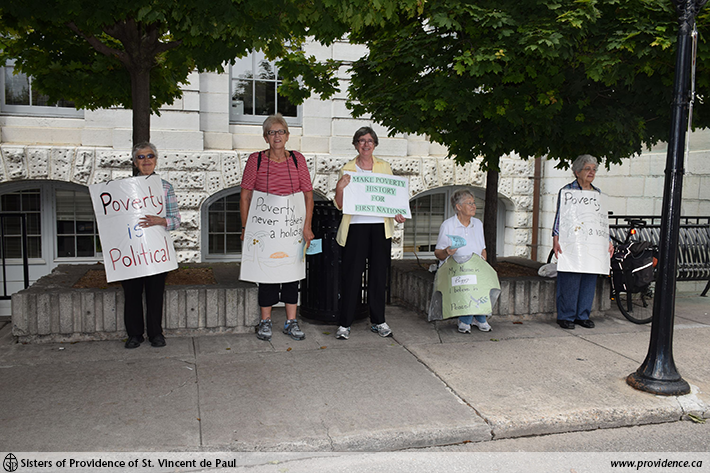 For 19 years, the Sisters of Providence of St. Vincent de Paul have held a vigil in front of City Hall in Kingston on Fridays between 12:15 and 12:45. Many others have joined that vigil over the years, as regular participants or as guests.

Although I have not been in Kingston, standing at City Hall, for all of those 19 years, I was there at the beginning. Like many others I was shocked that year, in 1995, when the provincial government, following it’s supposed “common sense revolution,” cut social assistance 21.6%. On top of that, all kinds of roadblocks were added to people receiving even that reduced amount!

When we Sisters heard that the author of the policy was being honoured by one of our local golf clubs, we were angry and determined to let him know how we felt. There was a massive peaceful demonstration at Lake Ontario Park and we were part of that. Unfortunately, that peaceful presence was ruined by just a few people who decided to go onto the golf club property and do some damage.

I remember how frightening it was, how people pulled their children out of the way when riot police in vans came tearing down the street. It felt like a very violent situation and we just wanted to get away. But we didn’t want to let the issue go.

Led by Sister Shirley Morris, then director of our Justice and Peace Office, we Sisters reflected on what could be another way to protest – on a non-violent alternative – and the silent vigil was born. Although we knew that this was a provincial matter, City Hall was the most visible place in Kingston to stand and speak to government. So that was where we choose to stand in silent protest each Friday at noon.

At first there were lots of Sisters going each Friday and people stopped and asked about our actions. Soon some joined us and so it grew. I left Kingston that fall and only returned and got involved again seven years ago. In the intervening years I followed keenly the many events associated with the vigil and always felt connected. I heard about candle lights surrounding City Hall one year; vigil-keepers wrapping City Hall with sheets another; and clotheslines of messages going all the way around. I heard how, on Good Friday, the vigil keepers stood with the cross decorated by newspaper clippings representing those who are crucified by injustice and poverty today. These events kept me linked and reminded me that there were people here in Kingston standing up for the poor everywhere and doing it in a nonviolent way.

A community of “vigil keepers” grew up in those years and, when I returned to Kingston, I felt I was joining this community, joining in their faithfulness, their nonviolent stance and, especially, in their care for the poor and most vulnerable.

Although there has been some improvement in social assistance over the years, the poor have never recovered from the effects of those cuts 19 years ago. And so the vigil has continued. And while I still attend on Fridays at noon, I believe it is important that we keep vigil in more than a physical way. We need to keep vigil so that we are not lulled into thinking things are OK when they’re not. We need to be vigilant about our governments’ policies and actions and bring people’s attention to what is going on, especially when our neighbours are being left behind.

When I stand there week after week, I pray for passersby, for the poor, and for those in government whose decisions have such an impact on the poor. Because I have worked in the North, in First Nations communities, I like to hold the sign that says: Make Poverty History in First Nations’ Communities. I tweet pictures and comments from our vigil to spread the word and to remind those who read them that we still have work to do in bringing about a just society. After 19 years of keeping vigil, my prayer continues to grow that we all work together to bring about a better world for all people.

Sister Una Byrne is a member of the leadership team of the Sisters of Providence. She tweets as @ByrneUn. The vigil uses the hashtag #FridayVigil.