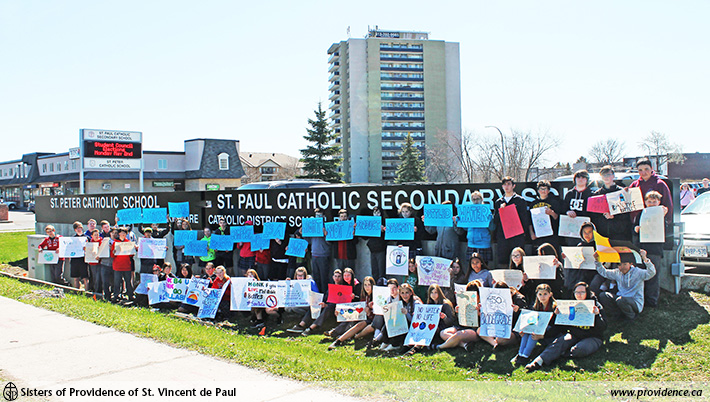 Throughout the month of April, students in each of the 39 schools of the Algonquin and Lakeshore Catholic District School Board were asked to show mercy by standing in solidarity with those who experience injustice. They did that by holding vigils and pilgrimages that honoured the legacy of the Sisters of Providence and vigil-keepers who held a Friday vigil in front of Kingston City Hall for 20 years.

These events allowed students to give witness to Catholic social teaching, living out the school board’s spiritual theme of Faith in Action. It was their special Catholic Education Week project, tied to the year’s theme of Opening the Doors of Mercy, a direct link to the Jubilee Year of Mercy. When Catholic Education Week occurred in May, we celebrated that witness.

In preparation for this event, principals and teachers were provided with information and prayer resources for vigils and pilgrimages, as well as a link to the video Vigil, Witness to Justice on the providencesisterstv.com website. The signs prepared by the students in each school reflected topics they had studied or issues that were meaningful to them. The format of the vigils held throughout April varied from school to school to reflect the local community.

In some cases the entire school body was involved. At Nicholson Catholic College, all students and staff walked in silence to Belleville City Hall where they stood for peace, justice, and those who experience poverty. The community of St. Michael Catholic School also in  Belleville gathered in the school yard to pray a living rosary for those who do not have access to clean water. In Trenton, the students of St. Mary Catholic School chose the theme Bringing Community Together and invited those from neighbouring public schools to stand with them. Food security was the issue chosen by St. Peter and St. Patrick Catholic Schools, who gathered at St. John the Apostle Church in Kingston to celebrate Mass and then walked together to the Memorial Centre.

In other locations, a single class or group participated. Students who recently returned from a mission trip to Jamaica led the vigil at Holy Cross Catholic Secondary School. Grade 7 and 8 students at Our Lady of Mercy Catholic School in Bancroft participated in a “We Are Silent” activity during which they did not talk or text for an entire day as a way to speak up for children around the world who are fighting for basic human rights. Showing kindness was the theme for the kindergarten class at Holy Name Catholic School.

Many schools used the vigil as one of the criteria needed to become a PeaceQuest School. Others focused on environmental concerns. One of these, Mother Teresa Catholic School, used their outdoor classroom as a prayer centre where students reflected on the gift of creation. Sacred Heart Catholic School in Marmora combined both issues using sunflowers as a symbol of the interconnectedness of people, plants and the planet.

A photo from each event was submitted to create a video which was shown at the Catholic Education Week luncheon. It provides clear evidence that the students of the Algonquin and Lakeshore Catholic District School Board are growing as “responsible citizens who contribute to the common good and dignity for all.” (ALCDSB Board Improvement Plan for Student Achievement and Well-being 2015-2016)

As Pope Francis stated in The Joy of the Gospel, “An authentic faith – which is never comfortable or completely personal – always involves a deep desire to change the world, to transmit values, to leave this earth somehow better than we found it.”

In June, after 32 years in Catholic education, Ann Boniferro retired. She was the Coordinator of Religion and Family LIfe Education with the Algonquin Lakeshore Catholic District School Board. 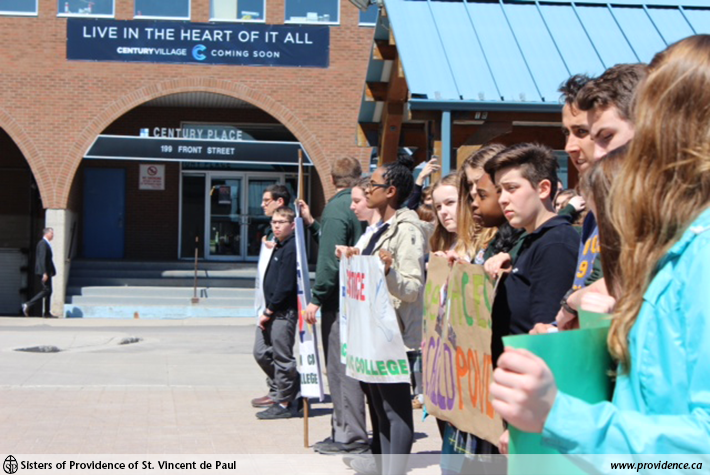 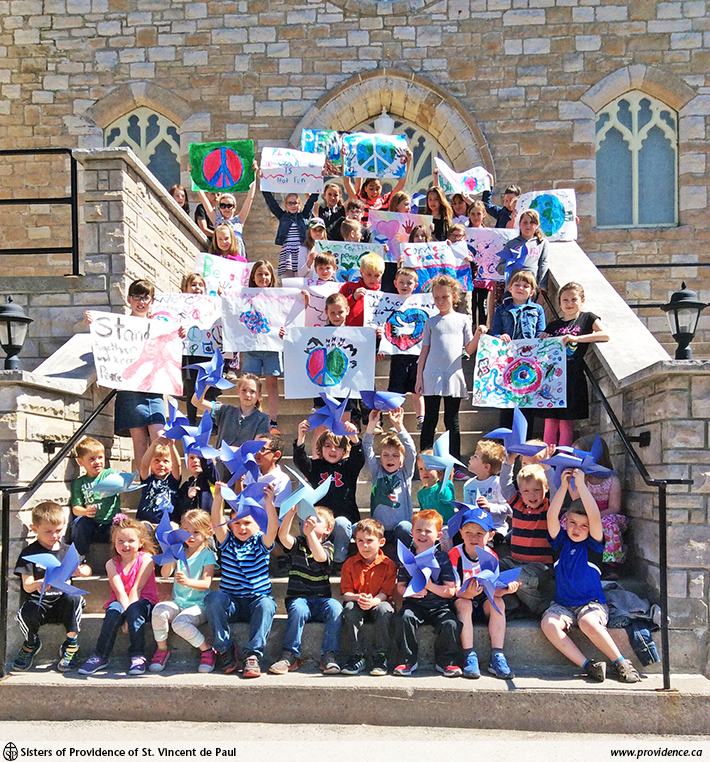 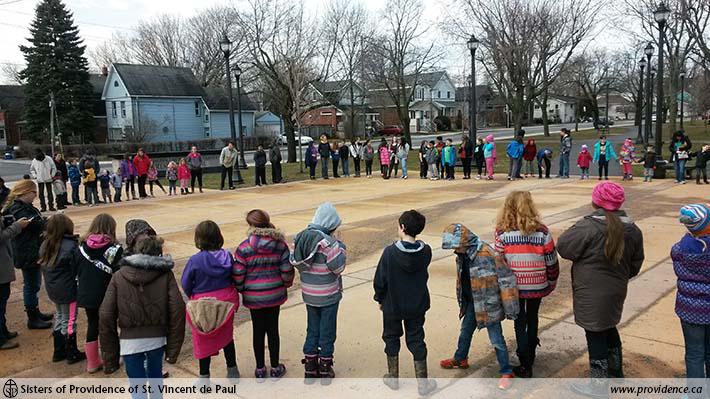