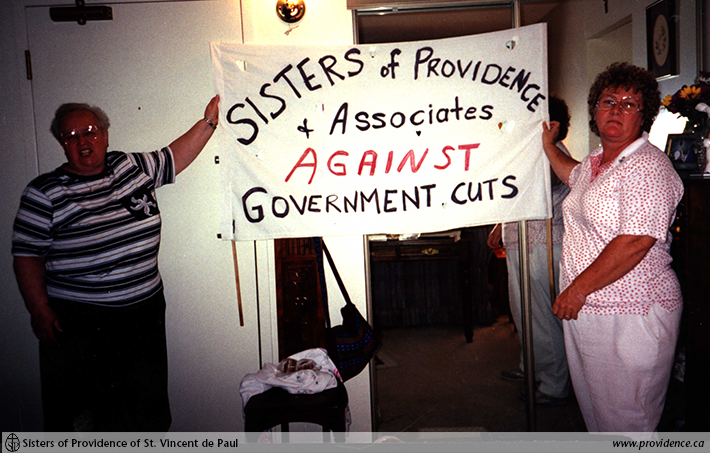 1995: Two Sisters hold up a sign they had just made at the planning meeting for the first vigil

As a Sister of Providence, I would like to express my gratitude to the many vigil keepers (“vigilantes!”) who participated and supported the Silent Vigil over the past 20 years.

In reflecting about the beginnings of the vigil, a major impetus for our social justice stance was the election in 1995 of a conservative government in Ontario led by Premier Mike Harris. In September, 1995, Mr. Harris presented the plans of the government to include tax cuts to the “Mush” sector which included municipalities, universities, social services and hospitals.

Part of its agenda was to begin their “Common Sense Revolution,” by cutting social assistance by 21.6%. This was done in order to boost the provincial economy by trimming the size of government and reducing taxes. The effects of the reduced social services budget upon the province’s poor and economically disadvantaged was immediate and far reaching. It was a direct assault on the people in Kingston as well as in other cities throughout the province. There was a lot of reaction.

In October, the premier was invited to a $150 fundraising plate dinner at the Cataraqui Golf Club in Kingston. The Sisters’ Justice and Peace Committee joined with other groups in protesting the upcoming cuts. Some people blocked the entrance while others participated in some violent actions necessitating the presence of the police. The J&P committee met with other concerned groups to discuss measures of responding to the tax cuts. There were many activities planned, including public forums, letters writing and protests held around the province. An inter-faith meeting was held in Toronto, which some of us attended. One idea that was suggested was to plan silent vigils throughout the province, carrying signs and standing in solidarity with those most affected by the cuts.

The cities of London, Ottawa, Toronto and Kingston were among those who chose this avenue.

In November, 1995, the Sisters of Providence, with homemade banners, began their weekly half-hour vigil every Friday noon. They welcomed anyone who wished to join them in front of City Hall, where the vigil has continued until the present time. It was intended to heighten public awareness of the fact that social programs are not costs but investments in people and in their communities.

The tools of the Vigil were the simple banners that were made by the J&P office with help of the vigil participants, as well as the leaflets that were handed out to passersby.

Why did we continue to use silence in our vigils? Our intention was to enter into solidarity with those who were being silenced by the effects of the reduced social services budget. It was also a way of protesting in a non-violent way – and the messages on the banners spoke volume. Our signs have always reflected the many injustices that the poor experience. Some examples are: child poverty, housing, health care, adequate food, clean water, a just wage – as well as for the many needs around the world such as war, refugees and climate change.

We hoped to call attention to the fact that poverty is political and that the policies of our government was affecting the most vulnerable in our society and hopefully to touch a few hearts of passersby’s.

In summer many tourists would stop by to visit city hall and  ask about the vigil. It was a good opportunity for education about what we were doing.

The vigil has also been a great avenue of networking and it has brought together a diverse gathering of people. It also represented community building and solidarity with those affected by the cuts, and a means of raising awareness about broader issues. 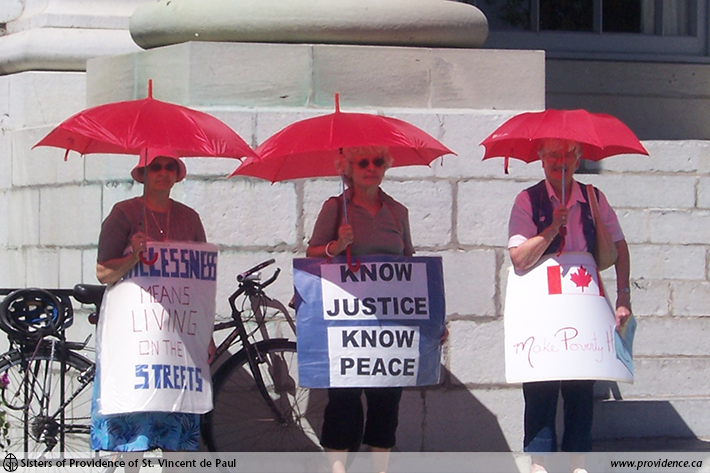 The vigilantes stood in front of city hall every Friday in all kinds of inclement weather from rain, snow, to hot sun and extreme cold. They stood with a common purpose and shared values and always stood in hope. It is only through compassion and justice that hope will be restored.

An annual celebration brought people together from around Kingston who joined in solidarity with the vigilantes. Sometimes we created displays and stood together outside. Other times, guest speakers were invited, music was played and sung and food and drink was shared by all.

For 20 years, people have come together from all walks of life to stand in solidarity with the most vulnerable in our society.

Each week the vigil began with an intention around which to centre our thoughts. And every week, we read together these words of Margaret Mead: “Never doubt that a group of thoughtful committed citizens can change the world, indeed it is the only thing that can.”