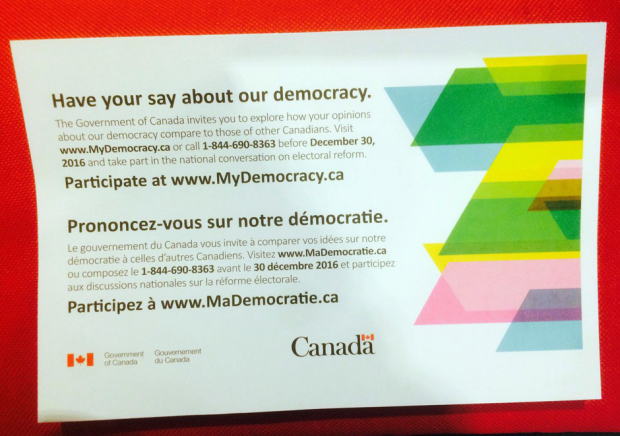 Two concerns she brought forward were due to recent action by the federal government: Were the Liberals reneging on their promise to reform the electoral system? And, how do they justify their approval of two major pipelines carrying oil and bitumen from the tar sands, which will undermine Canada’s Paris Agreement commitments to reduce greenhouse emissions and will compromise the rights of Aboriginal peoples.

But recent comments by the Prime Minister and by Democratic Institutions Minister Maryam Monsef suggest that the Liberals are backing away from their promise. Monsef rejected the recommendations of the December 1 report by the all-party Parliamentary Committee on Electoral Reform. Based on cross-country in-person and online consultations, the committee advised the Liberals to “design a new proportional representational voting system and hold a referendum to gauge how much Canadians support it.” Claiming that there was no clear consensus, Ms. Monsef then launched a postcard campaign inviting 15 million Canadians to participate in an online survey intended to stimulate a conversation about democracy.

Mr. Gerretsen said he had no inking about this latest development until a postcard arrived in his mailbox, and he maintained that his position on electoral reform hasn’t changed since Kainer last met with him in February. He favours some form of proportional representation, is opposed to a referendum, and still believes it is a problem when a majority government is elected with less than 40% of the vote. The government ought to follow through on its promise of electoral reform, he said.

Mr. Gerretsen’s views on the pipeline issue were less conclusive. The Liberal government recently approved two major pipeline projects, the Kinder Morgan Trans Mountain pipeline expansion, a controversial plan to transport Tar Sands’ bitumen to British Columbia’s coast; and Enbridge’s Line 3 replacement pipeline, which will carry oil from Alberta to Wisconsin. They rejected Enbridge’s Northern Gateway proposal, which would have transported Alberta oil through the Great Bear Rainforest to Kitimat, BC. While Prime Minister Trudeau argued that these decisions were “based on rigorous debate, on science, and on evidence,” he is facing strong opposition from environmental and Aboriginal leaders who charge that the pipeline approval undermines Canada’s commitment to the Paris Agreement on emission reductions.

Stating that he is passionately committed to combatting climate change, Mr. Gerretsen acknowledged that finding a new way forward is difficult. He notes that everything we have is made out of petroleum products. As long as there’s a demand and people can make money from it, fossil fuel production will continue. While we need to protect people and the environment now, the reality is that oil is being transported in other ways – by rail and by truck – which are even more dangerous than pipelines.

The meeting ended with Mr. Gerretsen agreeing to carry forward Kainer’s concerns to his government.