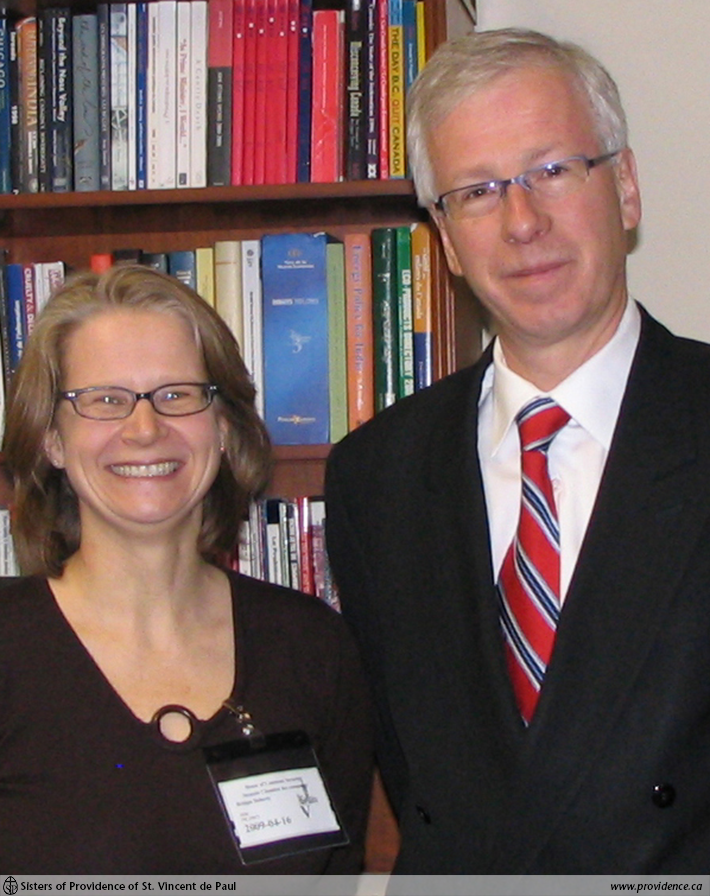 Bridget Doherty was hired in February to work in the office of Justice, Peace & Integrity of Creation. She deals with energy conservation and poverty issues.

To better understand the US intended invasion of Iraq, the Globe & Mail (2001) suggested reading: A Green History of the World: the Environment and the Collapse of Great Civilizations by Clive Ponting.

Little did I know that this book would move me from my couch into picket lines. No longer an armchair critic, I became an activist mum. (My three little rascals thought it quite funny, until they had to march.)

While political and environmental activism often feels like you are swimming against a rather strong current, I have had some small successes along the way that have only strengthened my resolve to fight for our children’s future in these times of climate change, peak oil and ecological stress.

I consider myself blessed that I have been hired by the Sisters of Providence to continue advocating for the protection of our air, water and earth.

I am nearing the end of my fourth month with the Justice, Peace & Integrity of Creation (JPIC) office and know that much will be achieved in the next three years.

I have met with staff from Utilities Kingston, St. Lawrence College, Queen’s and others to discuss the creation of a Low Income Retrofit Program in Kingston. This will not only ensure people can afford to heat their homes but it will also reduce local green house gas emissions.

I have also had the opportunity to meet with George Smitherman, Ontario’s Energy & Infrastructure Minister, John Gerretsen our MPP and the Minister of the Environment, as well as Stéphane Dion.

I have to say it was a great honour meeting Mr. Dion. It was clear, as we discussed Climate Change and Peak Oil that he genuinely understands the crisis and I believe Canada missed out on this much needed leadership.

Mr. Dion was very interested in the Sisters of Providence and our sponsoring congregation’s resolve to deal with Energy Poverty. He asked that I keep him informed on our progress which I certainly will do.